Surprisingly all three of us went to see Stage Kiss by Sarah Ruhl at The Guthrie. It is a rare occasion for all three of us to be able to fit the same show into our schedule, and we had fun. This was my first time seeing a Sarah Ruhl play. Amazing, I know because the Twin Cities has seen quite a bit of Sarah Ruhl in the past years. Back in 2007, Mixed Blood did a production Ruhl's 2004 play named The Clean House. As happens sometimes in this town, it received two contrasting reviews. Next came another 2004 piece Eurydice. This piece was first done by Prospero Theatre Company in 2010, and then in 2012 it was produced by Walking Shadow Theatre Company.  Also in 2010, Park Square Theatre did a production of Ruhl's 2007 play Dead Man's Cell Phone. This work was also produced by Theatre in the Round in 2014. The next work to appear on the Twin Cites stages was her 2009, Tony Award nominated, In The Next Room, or The Vibrator Play. This was produced by the Jungle Theater in 2012 and was directed by the Jungle's new Artistic Director Sarah Rasmussen. 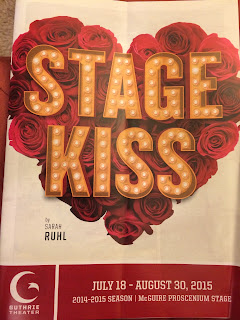 Finally Sarah Ruhl's 2011 play Stage Kiss is now playing at The Guthrie. While this played at Playwrights Horizon in New York, it has yet to see a Broadway production.  Everything that I have read about Ruhl and her plays leads me to think that they all have a fantastic side to them, yet are firmly based in reality. Think of Kushner and his Angels in America. Truly fantastic, yet still firmly rooted in real life situations, people, and experiences. And funny!!

Stage Kiss is the story of two actors who are cast in a play. The play is a old 1930's romance that never played well to start with and these actors (He, and She) are cast in the roles of lovers. She is married and he is her old fling - both onstage and off. And that is the start. The two actors (played incredibly well by Todd Gearhart and Stacia Rice) have to deal with their personal past relationship, their current budding romance along with their characters past and budding romance. I'm sure by now you have guessed why it is called Stage Kiss. The director on stage was played perfectly and hilariously by Charles Hubbell. His assistant and understudy for the leading man was played by Grant Fletcher Prewitt...and I can not think of anyone else who could play this role as sincerely yet getting every comic bit out of it, without milking the comedy. Wow. The cast also includes Michael Booth playing the husband (on and off stage), along with Rebecca Hurd and Cat Brindisi playing all the other female roles. Rebecca and Cat are used very well in Act One, but really come into their own in Act Two. I don't think there was a weak actor or character on stage all night and that makes for a fantastic night of theatre. Credit must be given equally to the cast, and the directer Casey Stangl.

I have to mention that the set design by Todd Rosenthal was also astounding. It starts in Act One in an old rehearsal space. As the first act continues, more and more of the set pieces are brought on till finally when the show they are rehearsing opens - it has a full parlor/living room set. Amazing! The set for Act Two didn't disappoint either. I'm not talking much about Act Two because you really should go see this marvelous work. And while you are there, you should swing by the gift shop and pick up a copy of Sarah Ruhl's "100 Essays I don't have time to write." I have only read a few snippets and really enjoyed it. I will be picking it, and copies of her scripts, up next time I am near the G. Also - take a look at her website. Such generosity to put excerpts of scripts, links to where you can buy them, photos from professional and non-professional productions - it is one of the best author websites I have seen.

So - If you miss Stage Kiss, make sure you don't miss anything else of hers. It will be a good night of theatre that will make you laugh and think - and can you ask for more? 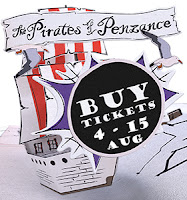 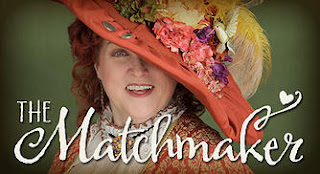 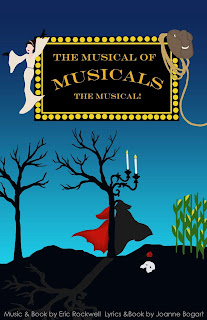