Marcus, or the Secret of Discovering New (to me!) Talent

One of the things I love about Minnesota theater (as opposed to say, New York) is that when I see an actor whose performance wows me, I am reasonably sure that I'll be able to catch them in another production soon.

I just had this delightful experience while watching Marcus, or the Secret of Sweet, a Pillsbury House Theatre and The Mount Curve Company co-production at the Guthrie Theater (playing now through October 5--go see it!)

This final installment of Tarell Alvin McCraney’s acclaimed Brother/Sister Plays featured an amazing ensemble cast.  A unique aspect of this play is that the cast often sat in chairs on the side of the stage and watched the action when they weren't in scenes.  Watching them watch the action was an unexpected delight.  So, on to the cast!

Some of the actors I had seen and enjoyed in theater around town, like Aimee K. Bryant (loved her most recently as Marian the Librarian in Ten Thousand Things' The Music Man), Thomasina Petrus (love her AND her cashew brittle), James A. Williams and Nathan Barlow.

But there were a few actors that were pretty new to me that I am definitely putting on my don't-miss list:

Mikell Sapp (Terrell) - There are some actors who capture your attention so completely when they're onstage and Mikell Sapp is one of those actors.  He has an amazing energy and wonderful timing. Saw him first in The Ballad of Emmet Till at Penumbra Theatre, where he stood out in that excellent cast as well.

Joy Dolo (Shaunta lyun) - I've never seen Joy Dolo before (although her local appearances are extensive--I'm a little ashamed to have missed her), but will keep an eye out for her work.  She is incredibly funny and quite poignant as well.  Marvelous performance.

Lauren Davis (Osha) - Lauren Davis (and Joy Dolo) so perfectly embodied the characters of teenage girls, it was hard to believe they weren't straight out of a local high school.  Davis, in particular, was so uncannily accurate that her character gave me some interesting insight into my library's teenage patrons.

And just for fun, here's a cute Star Tribune blog post (with pictures!) about McCraney's visit to the Guthrie to see Marcus.  From the post:

Playwright Terell Alvin McRaney McCraney said that he often is fully engaged, sometimes in call-and-response style, when he watches his shows.

To wit, he laughed out loud during Saturday's evening performance of "Marcus," sometimes talking back (encouragingly) to the actors.

“That’s it,” he said during a musical number called “Sun Shower,” performed by Nathan Barlow as Marcus and Lauren Davis and Joy Dolo as his friends Osha and Shaunta.

How much fun would it have been to see it with McCraney?  SO fun.  No shushing the playwright!
Posted by Carly 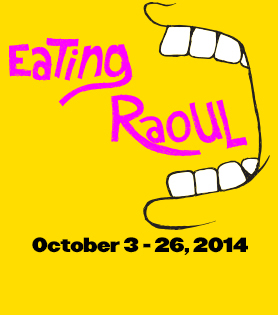