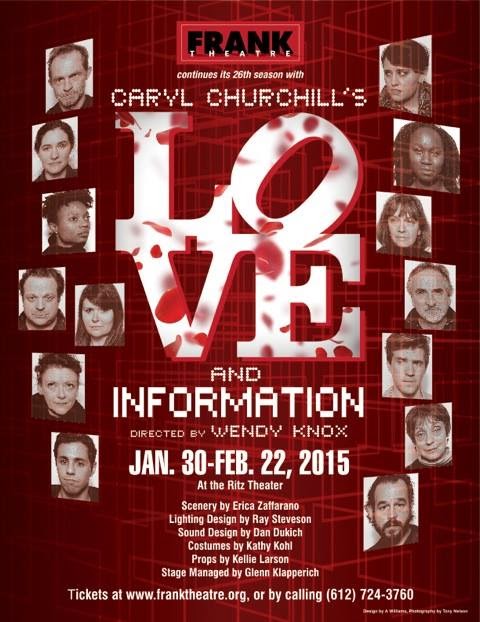 Since I caught the very last performance of Frank Theatre's Love and Information, I won't go in-depth about it. But I did want to give a little shout-out, because the show was great! Frank Theatre and director Wendy Knox have a strong record of choosing challenging plays to perform, and this one is particularly interesting. It's the latest play from Caryl Churchill (Cloud Nine, Top Girls, and many more), and just premiered at the Royal Court Theatre in London in 2012.

In a short pre-show introduction, Knox informed us that the script for Love and Information, which includes 57 scenes in 90 minutes, does not include settings or stage directions, and the lines aren't assigned to any characters. Thus, each production will be different.

Frank's version was wonderful, with a great cast of 14 performers playing over 100 roles in scenes as short as one line. (Also, gotta love a 90 minute-no intermission show!)

Now that I've seen the show here, I've started to look at writeups of other productions. Apparently, the Royal Court production included scenes in a steam room and on exercise bikes. The same director, James Macdonald, staged the first New York production, and there's a nice story in the New York Times about the set design for that show. If you've seen Frank's show or not, it's an interesting piece to read about.

And one more plug: this is the last show of Frank's season, but keep an eye out for their next season to be announced. They choose really interesting material and are definitely worth keeping an eye out for!
Posted by Jules