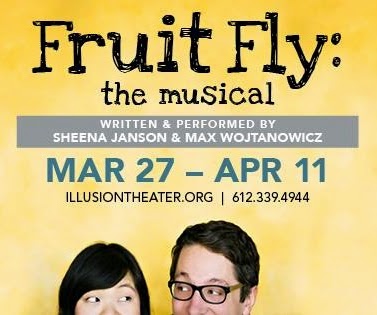 They had me at the title: I love my gay male friends and appreciate the unique qualities of our relationships. I don't know how I missed the previous iterations, but I was not going to let the newest version of Fruit Fly pass me by!

The show is the brainchild of Sheena Janson and Max Wojtanowicz, I've appreciated each of them on stage separately, including Sheena's touching Desiree in the Mu Performing Arts production of A Little Night Music and Max in the Nautilus Music-Theater production of Ordinary Days. In addition to being talented in their own rights, the pair have been friends for a lifetime, and they built this show around the framework of their friendship.

The simple set on the Illusion Theater stage includes a large whiteboard, on which is written the progression of the show, a guide to the jokes and references in the show, and a space in the upper left corner marked "Sondheim References." With that, they already had me charmed. Most musical theater has its fair share of Sondheim references, so I loved to see them addressing it so directly!

Max and Sheena start the show amid a squabble that clearly illustrates their beyond-comfortable relationship. They are witty and charming, and so are the songs, with music by Michael Gruber that occasionally evokes Sondheim, especially when the singers are racing through their snappy, wordy, and funny lyrics. And yes, there were a few humumumumumable melodies. (And if you get that reference, this show's for you.)

From members of the children's chorus in a production of Joseph and the Amazing Technicolor Dreamcoat and on through high school and college, their friendship grows, hitting a few bumps along the way but seeming to thrive as they live their adult lives. Of course, there is a crisis, and it's a biggie. When one of the pair gets involved in a serious romantic relationship, the other feels left behind. This part of the show went on a bit too long for me, though it was so well performed that it's amazing that they willingly relive such a traumatic breakdown. (Also, it's not exactly suspenseful. If they hadn't stayed friends, we wouldn't be watching the show, right?)

Overall, it was a delightful 90 minutes (no intermission--get your box wine before the show)  of laughter, a few tears and a lot more laughter. I think anyone will see their own long-term friendships reflected onstage, as the joys and strains are universal, while still being wonderfully unique to Sheena and Max.

If you fall in love with Sheena and Max in this show (and you will, unless you already love them), you can catch more of their work at the monthly cabaret they created and host on the first Monday of each month at Hell's Kitchen. Musical Mondays is a fun night for seeing theater people from all over the Cities performing musical theater songs in a variety of themes, It's the closest we have here in Minnesota to NYC's fabulous 54 Below, and it is a can't-miss event if you love musical theater,
Posted by Jules