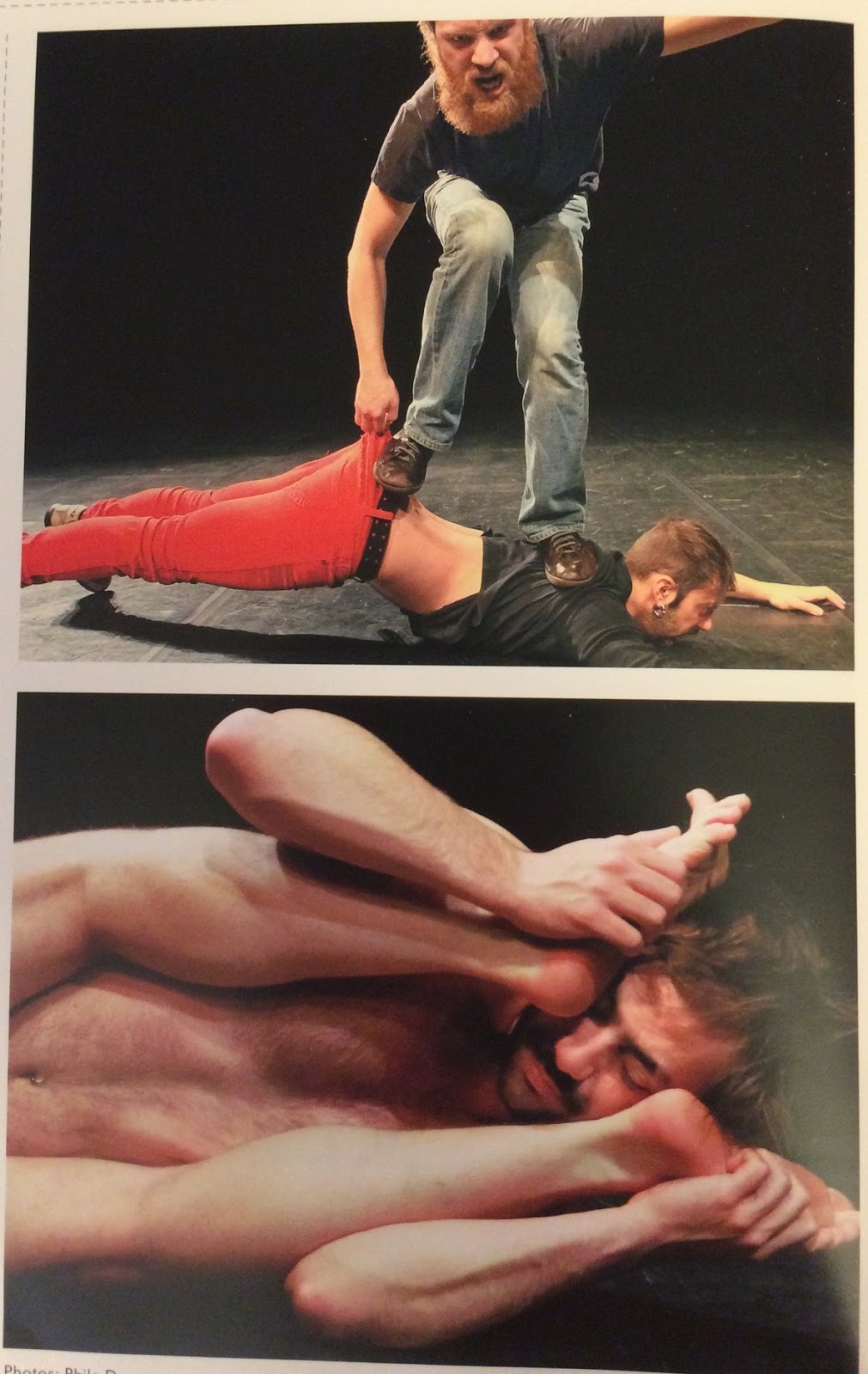 The work itself, to me, was an exploration of how men interact. There was a lot of aggression, and yet there were tender moments, and even intimate moments. While Gui would at times talk to the audience, or say a word or two, Pieter only vocalized. He started out being very aggressive, and growling at Gui. There were waves of aggression between the two of them, mixed with times of friendship, or brotherhood even. Gui holding Pieter down while wiping spit on his hair and beard - certainly a brotherhood moment, picking on a younger sibling, or is it bullying? There are no straight answers coming from this piece.

About half way through the piece, in a moment of aggression, Gui rips Pieter's shirt, then rips his own. Then they start undressing themselves, using their belts to whip each other, using their shirts to hit each other, or wrap around their head. Even putting a pair of underwear on the head as a mask. It ends with them both being fully nude. Gui grabs Pieter's foreskin, Pieter grabs Gui's foreskin and a duet starts. Neither of them let go of the other mans genitals and so it became an exploration of what movements could be made while linked in this manner. Even when they let go, it followed in an exploratory manner and it was visually really interesting. Because Gui is Portuguese, and Pieter is from Burundi, but from a Belgium background - they have different skin tones and hair color. This created a really interesting visual of seeing the tan skin on top of a pale skin. It reminded me of some Mapplethorpe photos. Along with that, the exploration of movement reminded me of Eadweard Muybridge's work. Slow movement so you can see the muscles working and how bodies move in space.

Despite the work starting with aggression, and the waves of aggression through out, the work itself ended in tenderness. It was so easy to see the love and trust between these two men - not only as dancers and artists, but also as friends.

The performances are Jan 15-17 at 8pm. There were seats available when I went last night so if you have a chance to see it tonight, take the chance.

I'm linking a few videos below. Please note, some of them may be age restricted due to the nudity of the performers. I'm also including a review from Dylan Skybrook as posted on MN Playlist.