Annapurna Scales the Heights at the Jungle

Annapurna is the name of a mountain in Nepal. It's also the title of Sharr White's new play, set in a decrepit trailer at the base of another mountain in Colorado. But the largest peak in this play is the distance separating the two characters.

Ulysses lives in the trailer, isolated from the world and most human contact. His ex-wife, Emma, shows up unannounced, hauling a pile of baggage both literal and metaphorical. Emma left Ulysses 20 years ago, taking their young son with her, and they haven't been in contact since. So why is she suddenly here on her ex-husband's sad excuse for a doorstep?

Well, that's the play. I don't think one needs to know anything more going into it. I knew it was a new play, a great director, a wonderful set, and a terrific cast, and that was enough to get me to the theater.

Terry Hempleman looks terrible as Ulysses, which is perfectly appropriate for a cranky hermit who is facing his imminent demise. Angela Timberman's Emma starts as an enigma, both to the audience and to Ulysses, who learns about her motives at the same time the audience does. The two have a wonderful chemistry, their relationship turning from prickly and antagonistic to sweetly nostalgic and back again in a moment, just as happens in longstanding relationships. And despite their separation, it's clear that Emma and Ulysses' bond has been an ongoing aspect of their lives apart. Hempleman and Timberman keep a crackling energy going throughout the play, which is very funny even as it deals with some very dark issues. 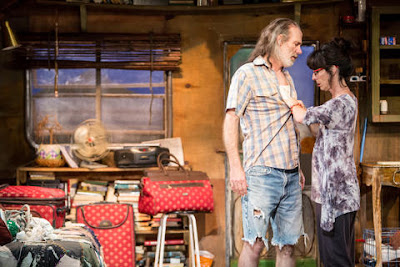 Director Joel Sass designed the wonderfully realistic set, a cross-section of the trailer that looks authentically run-down and lived in. You can read more about the set here.

Sass also orchestrates a natural flow and rhythm to the dialogue. After seeing too many shows in which people shout at each other for hours, I've gained an appreciation for more modulated acting, so that when there is shouting, it really feels warranted. No doubt it helps that the Jungle's space is so intimate that actors don't have a huge house to project to.

The play is beautifully written, with naturalistic dialogue that never feels forced or "actor-y." From frustrated cursing to some very poetic turns, each line is completely appropriate for these characters and sounds conversational coming from these two actors. And of course, if one wishes to explore the parallels between these two and the story of Odysseus (Ulysses is the Latin name for Odysseus), who at the end of the Trojan War spent years trying to get back to his wife and son, that's another layer. You don't need to be familiar with Homer or mountains in Nepal to want to spend time with these characters, though. Their interactions stand on their own.

Annapurna runs through October 18 at the Jungle Theater. If you need more persuading to see it, check out the trailer.
Posted by Jules