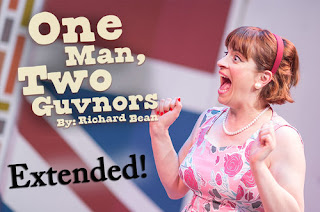 There's still one weekend to catch the terrific production of One Man Two Guvnors at Yellow Tree Theatre. This was my first experience at Yellow Tree, and it was certainly worth the drive to Osseo (which was not as long as I expected!).

Based on the Italian comedy The Servant of Two Masters, One Man Two Guvnors sets its action in Brighton, England, in 1963. The story revolves around Francis Henshall, newly arrived in town with his employer. He takes on another job, making him the one man with two guvnors, trying to juggle both jobs and employers while trying to get something to eat. The plot is ridiculously convoluted, featuring an assortment of shady characters in increasingly silly situations.

Characters speak in distinctly British accents with the slang to match, which can take a bit of getting used to, but it's an important part of the atmosphere, along with the period costumes and music. The whole thing works amazingly well with the commedia dell'arte-inspired style of the Goldoni play, which includes asides to the audience and plenty of physical comedy. Richard Bean's script was originally performed at the National Theatre in London in 2011, with James Corden as Francis. The show was a huge hit that transferred to the West End and later, to Broadway.

The Yellow Tree production features an incredible cast that work together seamlessly. Besides playing their characters to perfection, the cast also perform interstitial songs that were written for the original production. In the London production, a separate band played the music, with occasional vocals by the cast. Under the lead of Brant Miller, this group does double duty, playing everything from guitar and drums to washboard and kazoo. (Note: the song lyrics cleverly relate to themes in the play and are definitely worth a listen on their own after you've seen the show. Amazon carries the original cast recording.)

Jason Ballweber plays Francis with exactly the right blend of guilelessness and charm, entrancing the audience while keeping them in stitches. Marika Proctor plays the first guvnor, a woman masquerading as her dead brother, with enough swagger to convince the other characters of her identity. Granted, the folks she's trying to trick are not the brightest bulbs. Sam Landman bellows as businessman Charlie Clench, who's celebrating the engagement of his dim daughter (Elise Langer) to the son of his colleague Harry Dangle (Peter Simmons). Neal Skoy revels in the ridiculousness of the fiance, whose dream is to be an actor, but whose idea of acting is melodramatic at best.

Ryan Lear shines as the second guvnor, who clearly has more looks than brains, but an excellent way of expressing his heartbreak in an unexpected instrumental solo. Elena Glass is the long-suffering bookkeeper who has an eye for Francis, Warren C. Bowles is a pub owner who can keep a secret, and Tristan Tifft is an elderly, but very spry waiter who takes a lot of physical abuse. I wanted to mention everyone, because each actor is terrific, adding up to a fantastic ensemble.

Director Anne Byrd has done an amazing job of keeping the play moving on Gabriel Gomez's compact but surprisingly functional set. The technical aspects are all top-notch, including Sarah Bahr's character-defining period costumes. Special recognition is owed to dialect coach Keely Wolter. The specificity of the various English accents contributes enormously to the tone of the play, and the actors carry them off splendidly.

One Man, Two Guvnors is not a play to change the world, but it keeps the audience laughing, even howling, for the entire evening. Don't miss this opportunity to see this hilarious production, as a more masterful comedy is unlikely to come along anytime soon.