Some Shows We Saw in March/April 2018

Here's a round-up of some of the shows we've seen lately. 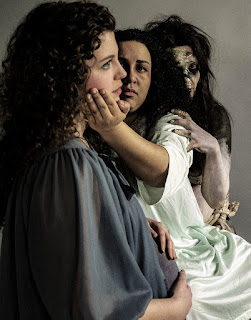 This seldom-performed play by Caryl Churchill is one of those plays that is incredibly enjoyable to watch, even if you're not entirely sure what's happening on stage. So let's let Fortune's Fool tell us what we're seeing!

"Mankind is destroying the Earth and the Skriker, a malevolent shape-shifting fairy and death portent, is pissed as hell. In her search for revenge, she leaves the underworld to pursue two teenaged girls in London: Josie, who has murdered her young child, and Lily, who is pregnant. Speaking in riddles, changing her shape at every new encounter, alternately promising glorious wishes and threatening physical harm, she seeks ownership of their souls by any means necessary. A wild chorus of dancing, pounding, singing, wailing spirits, drawn from English folk tales, serves the Skriker in her pursuit of the girls."

The wordplay in this play is so complicated and beautiful that I wish I had a copy of the script with me to read along or open captioning so as not to miss a word. Ariel Leaf delivers this dialogue beautifully as the titular character and turns in a charismatic performance with humor and menace--a beautiful combination. Another standout in the cast is Gabrielle Dominique as Josie. The makeup and costumes are perfectly done, and the music by Keith Hovis adds an extra otherworldly feel.

A couple comments about the Crane: the low lighting in the lobby made it hard to read the displayed material about the creatures included in the play. Also, they could use better sound containment if they are going to have two shows playing at once. At times, it was hard to lose oneself in the atmosphere of The Skriker with a comedy show playing only a few feet away. Still, it was a really fascinating, spooky show that has really stayed with me. 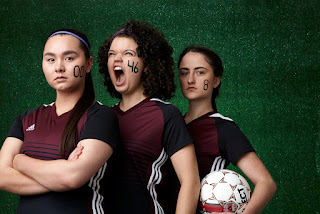 The Wolves is selling out like crazy and adding performances and we couldn't be more pleased for the Jungle. This beautiful, modern, contemporary play is what theater should be. Plus, it's a female playwright, female director and an all-women cast. Go TEAM!

From the moment that The Wolves starts, with a girls' soccer team stretching and bs-ing, it is ON. The dialogue is fast and overlapping and profane and heartfelt. As the girls show up for practices and games, we get insights into the issues they're facing, but never in a heavy-handed fashion. The performances are astonishing and the 90 minutes, no intermission show flies past in a flash. The language is beautiful, the characters are realistic and well-drawn, and the issues are real. Just freaking wonderful, and we're so excited for this production's amazing success.

A play in a tap room? In Saint Paul? Yes, please. It's always a little daunting when the director's note indicates that "many have struggled to appreciate the Trojan Women" by Euripides. Ooh, boy. But Mission Theatre does a beautiful job of bringing this story into an unidentified contemporary world.

TL;DR from Wikipedia: "Euripides's play follows the fates of the women of Troy after their city has been sacked, their husbands killed, and as their remaining families are about to be taken away as slaves. However, it begins first with the gods Athena and Poseidon discussing ways to punish the Greek armies because they condoned that Ajax the Lesser raped Cassandra, the eldest daughter of King Priam and Queen Hecuba, after dragging her from a statue of Athena. What follows shows how much the Trojan women have suffered as their grief is compounded when the Greeks dole out additional deaths and divide their shares of women."

The show has a wonderfully strong start, with a hilarious Twitter exchange between Athena and Poseidon depicted on screen. We soon move to a contemporary and familiar-feeling Troy, and the women who have been captured. The cast is committed and engaging, with Annette Kurek providing a strong, grounding performance as Queen Hecuba and Gary Dancui as conflicted villainTalthybius. The costumes (by Krista Weiss) are perfectly done, in a found/reclaimed fashion. The temporary feel of Urban Growler's back room, decorated with hanging blankets and quilts wonderfully depicts a refugee camp. Projections, lighting, and sound design (such as utilizing helicopter sounds to indicate the arrival of ships) work really well, considering the limitations of the space. And in short, I love their energy and enthusiasm. Yay, newish theaters!
Posted by Carly