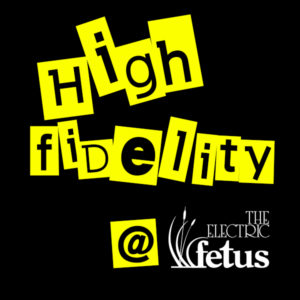 Dear Minneapolis Musical Theatre, you are a genius.

Staging the musical High Fidelity at Minneapolis's beloved record store The Electric Fetus is truly inspired. (The show plays through May 20--get your tickets now, before they sell out!)

High Fidelity is about Rob, a record store owner who gets dumped by his girlfriend Laura and tries to figure out what went wrong in this and the other relationships in his past. All of this, and everything else in Rob's and his employees' lives, is intrinsically related to music.

Man, I love High Fidelity. Nick Hornby's novel was remaindered when I worked at a book distributor in Minneapolis and the staff all bought and loved it. The 2000 movie starring the perfectly cast John Cusack, Jack Black and Todd Louiso (and Joan Cusack, Tim Robbins, Catherine Zeta-Jones, Lili Taylor--come ON!) still holds up beautifully today.

High Fidelity, the musical, is perfectly adapted from the source material--so perfectly it seems completely organic. The pedigree is amazing: book by David Lindsay-Abaire (Rabbit Hole, Shrek the Musical), music by Tom Kitt (Next to Normal, If/Then) and lyrics by Amanda Green (Bring It On, Hands on a Hardbody). It closed on Broadway in 2006 after only 13 performances, which is surprising, since it's a completely charming musical with great songs, a strong book and delightful lyrics.

So why didn't it take off? I can't help but imagine that it was because it was not staged at the Electric Fetus. Some site-specific shows work better than others, but MMT's High Fidelity is the perfect combination of material and location. The joy of seeing this show play out in an actual record store more than makes up for any minor inconveniences. 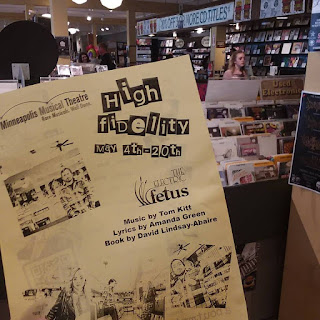 Beyond the perfect setting, it's hard to imagine the musical being performed by a more winning cast than Minneapolis Musical Theatre's. Taras Wybaczynsky as Rob embodies the perfect blend of jerk and potential hero with charisma and a strong voice, and Jorie Ann Kosel plays the challenging character of Laura with aplomb. Maxwell Ward brings incredible sweetness and quirk to Dick, and Dorothy Owen as Liz steals every scene she's in and she has some serious pipes. The entire cast is strong and appropriately quirky in all their roles and sing the heck out of this show.

Kudos to director Sara Pillatzki Warzeha and choreographer Abbi Fern, and to stage manager Miranda Shunkwiler, who make the space work beautifully. Audio designer Abe Gabor sets the sonic atmosphere and makes sure the actors can be heard without the sound blowing the audience away. And Alex Kotlarek's perfect costumes make it easy for the actors to switch characters in moments, right in plain sight.

In response to your questions:

Yes, it's really performed at the Electric Fetus. Yes, you do have to stand for approximately two hours (but you can move around and lean against the rows of record racks). There are a few chairs if you need to sit down but sightlines aren't great from those seats. The musical is literally performed in the aisles of the record store. They've put in platforms in a few of the aisles, and the cast has crates that they move around so they can get a little height in during their songs. The band is on a small stage next to the counter, and the sound is surprisingly terrific. Oh, and yes, you can buy things at the Fetus--they'll keep the tills open till about 20 minutes after the show. So support them and their willingness to host this show. Especially since the Franklin Street bridge construction has to be giving them hard times. Also, they have amazing merch. So many adorable socks! Cat skirts! Prince tees!

One of the most charming parts of the show was looking around and seeing the absolutely delighted looks on the audience members--particularly the guys. I'm used to seeing men in the theater looking a bit resigned and patient, but hardly ever this out-and-out engaged and enthusiastic. It was adorable. This show reminded me of a time that I LOVED hanging out in record stores. With the first song, "The Last Real Record Store," the audience was all about this show. Minneapolis Musical Theatre's tagline is "Rare Musicals. Well Done." and it's absolutely true.
Posted by Carly