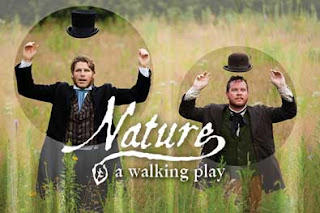 I spent about 30 min outside today, just around late afternoon. I live just north of 694 and the area is quite nice - lots of tree, grass, a pond; and yet I can hear the rumble of traffic, I can see cars driving by from my deck, and there are neighbors. 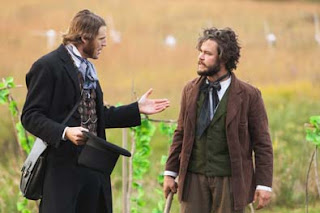 I had a similar experience when I went to see Nature at Washburn Fair Oaks Park just north of the Minneapolis Institute of Art. It was a gorgeous late afternoon, there were trees and grass, some sounds of traffic, some sounds of other people enjoying the park, and the sun was low in the sky. It was a perfect night to see Nature.

This show is presented by TigerLion Arts, and it tells of Ralph Waldo Emerson and Henry David Thoreau's mutual love of the natural world.  It also tells of the lives of these two great gentlemen, thinkers and writers. It is a fascinating story told by an ensemble of actors portraying various roles, and providing sound effects, creating props, etc. Ralph Waldo Emerson is played by Tyson Forbes (a direct descendent of Emerson, as well as being a co-creator/writer of the work), while Thoreau was played by John Catron (Sam Elmore plays Thoreau at other times). The piece provides a view into their lives that is simple and beautiful, yet incredibly complex and relevant at the same time. The whole cast was fantastic, as were the musicians and singers. 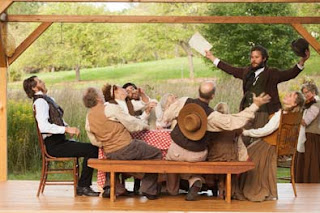 One thing that made this piece as wonderful as it was is the fact that it is a "walking play." One the night I saw it, it started in a hollow in the park. Benches were set up, a small group of vocalists were singing music of the period and I was told to go to "the small church." The show started with a reverend starting a service and being interrupted by a woman portraying Nature. She then introduced Emerson and Thoreau, and we were off on an exciting journey. Background was given about both men and their introduction to each other took place. Then we moved. We were told to follow musicians and we made our way up an incline to the open expanse of the hilled center of the park. It was a perfect location as the two men made their way towards us, while also having a conversation. Were they using microphones? No - the ensemble was standing on a platform behind the audience, and they were speaking for the gentlemen, creating sound effect of the breeze, eating an apple, a swarm of bees, etc. Once the men got close enough, they did start to speak themselves but it was a very imaginative way to have a scene in an open space and yet still keep everything natural.

When that scene ended, we moved as an audience to another location in the park. This happened four or five times through out the piece and each of the four locations was perfectly suited to the action of the play. Eventually we ended back at the "little church" for the final scenes. 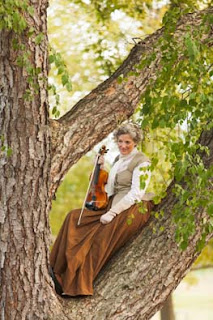 This is the start of the tour. TigerLion has collaborated with parks, arboretums, universities and various communities across the country in a way to reconnect with the natural world. From Minneapolis, this tour moves to Park Rapids, Alexandria, Grinnell, St. Johns/St. Benedicts, Gustavus, and ends in Carleton. After seeing the show at the park, I must confess that there is a part of me that wants to follow the tour so that I can see how each location is used. Along with that, the ideas spoken to in this show are worthy of more thought. With that in mind, I provide the following links.

If you have a chance to see this work, please do so. It is lovely and simple, so well performed and such a joy to experience. It is recommended to bring a portable chair or blanket as seating is not provided except at the "little church." I would also suggest a bottle of water, and possibly bug spray.