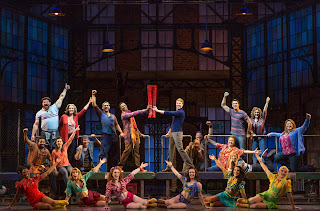 Ladies, Gentlemen, and those of you who have yet to decide - Kinky Boots is in a word - Fantastic!

The multi-award winning show Kinky Boots opened last night at the Orpheum. The story is about a man who is trying to find a way to save his family's shoe factory. In trying to do so, he comes across the idea of making stiletto boots for the men who wear them. Of course, there is romance, and conflicts that need to be overcome. The show is still playing on Broadway (at the time of this writing) and won six Tony awards in 2013, including Best Musical, Best Original Score, Best Choreography, and Best Performance by a Leading Actor. Even though Billy Porter is not touring with the show, all of that award winning talent is evident on stage.

The set is a shoe factory. The show starts with an actor walking in through the front door for work and takes a phone call. He then provides the very clever pre-show announcement about silencing cell phones, not texting, or taking photos, etc (though some folks still didn't get that message, but more about the audience later*). The first number clearly sets the stage and gives a brief history of Charlie growing up in a shoe factory and being told that he would be in charge of it later in life. It also shows Lola growing up and the trouble she has to deal with, and finally the upwardly-mobile life-view of Nicola - Charlie's girlfriend. The joy is that all of these viewpoints are shared while focusing on shoes. Charlie and the shoe factory (making men's shoes), Lola and the bright red heels she likes as a boy, and Nicola's desire for a pair of shoes that cost three-months rent. 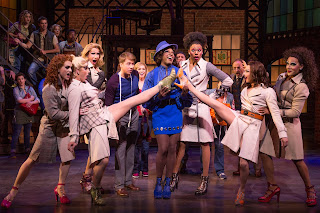 Charlie's father dies and he has to figure out what to do with the factory. On his way out of a pub, he sees a woman being chased and steps in to protect her. She doesn't need his protection, swing her purse and accidentally hits Charlie. She takes her to her dressing room and we are introduced to the land of Lola - a drag queen. Billy Porter won a Tony award for his performance as Lola on Broadway. Kyle Taylor Parker was incredible as well. As Lola, he knows how to work some high boots and great drag! He never felt like he was over-the-top but was so natural. In fact, he was so natural that when he comes on stage dressed in a suit and tie, it is clear that he is uncomfortable. Lola is backed up by her "Angels" - six gorgeous men in drag. By the reaction of the audience last night, this town loves their drag queens! After the first number by Lola and her Angels, Charlie realizes that this is his niche market for shoes - tall, stiletto boots for men - and a way to save the factory. Of course, there are some relationship issues that need to be worked out. The relationship between Charlie and Nicola, between Charlie and Lola, between Charlie and Lauren (the girl at the factory who is majorly crushing on Charlie - and played by the amazing Lindsay Nicole Chambers [Gayle from Submissions Only]), and the relationship between Lola and the factory workers. 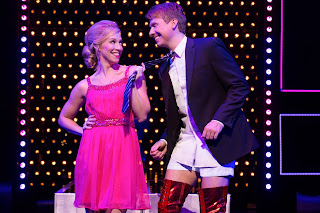 For the rest of the story, go see the show. If you can't make it, then I would recommend watching the film. The film was based on a true story, and was translated for the stage by Harvey Fierstein with music and lyrics by Cyndi Lauper. It was all directed and choreographed for the stage by the amazing Jerry Mitchell. The versatile, multi-level set by David Rockwell was amazing. I never felt trapped by the factory set as it was used so fantastically, and it changed up so easily for other scenes. Of course, the costumes for Lola and the Angels are going to get most of the "publicity" but the rest of the costumes were perfect for the time and place. The score is very pop with some gorgeous ballads as well. And for a "pop" show, even the sound levels were perfect, with some really cool surround-sound effects during a number. 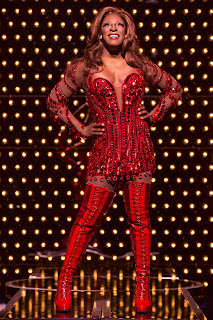 I already called out Kyle Taylor Parker as Lola but I also have to call out Steven Booth as Charlie. While he was at first uncomfortable being around Lola, he opened his mind and accepted her for who she is - not as a gay man (as her sexuality is never mentioned) - but as a person who expresses herself differently. And this is the true message of the show - change your mind and you can change the world. For an amazingly fun show to have a subtle message is fantastic. And speaking of fantastic - I have to call out Lindsay Nicole Chambers. If you are a fan of the webseries Submissions Only, then you know her as Gayle. This role of Lauren is a total turn-around from that role. And what an amazing voice!! I also have to mention the Angels, and the rest of the cast. Every role was perfectly cast and well played. I had a LOT of fun watching the show, and it was clear that the cast was loving every minute as well.

*now, about the audience...First off. When the tickets say that the show starts at 7:30, it means it starts at 7:30. There were probably 30+ people coming in after the opening number. I know that there were multiple things happening downtown Mpls last night but 7:30 means 7:30. Also - I noticed quite a few people walking out during the first ballad, and coming back in. On the other hand - the audience last night was looking for a great fun time, and they were present for it. There was cheering and extended applause after almost every number, and for certain after every number of Lola's. The standing ovation was almost instantaneous as well. There was so much energy coming from the audience, and it was a loud house in a good way. I was really amazed!