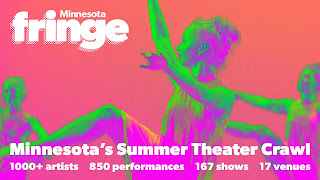 Friends, this year, I am FRINGING with a vengeance.

I'm taking vacation from the day job and utterly dedicating myself to see all the 2017 Minnesota Fringe Festival shows that I can.

Won't you join me (and my fellow theater bloggers) in this fantastic theater celebration that runs August 3-13 at a variety of venues about town?

Step One: Read Cherry and Spoon's tips for newbies, which has helpful information like this:


"You'll need a daily wristband (sold at the box office at each location for $16 on weekdays or $22 on weekends), which will get you into any show that day. Once you have a wristband, get a token for the show from a volunteer, and get in line for the theater."

C&S also recommends sunscreen which makes me a bit trepidatious--what am I, camping?

Step Two: Comb through the helpful Minnesota Fringe website and add promising-sounding shows to My Queue.  Right now, I have sixty shows in My Queue. Apparently, math says you can only see 56 shows, so it's an ambitious start.

Step Three: GET ORGANIZED. I believe math and geography will be involved.

And now, to help you plan your Fabulous Fringe Experience, here are the shows that I am most looking forward to:

Jefferson Township Sparkling Junior Talent Pageant: A New Musical - by Devious Mechanics
Twenty years after a freak accident ended the Jefferson Township Sparkling Junior Pageant, three contestants will settle the score and see who should've won by finishing the pageant, in all its pre-teen glory.
Why I'm In: This musical is written by Keith Hovis, a writer/composer/actor whose work we've loved lately (Teenage Misery, Public Exposure). Also, it stars Ryan London Levin and Kelly Houlehan. Plus, a beauty pageant! Sparkle, baby!


Blackout Improv - by Rogues Gallery Arts
Members of this all person of color improv team take on the Minnesota Fringe in a way that only they can, with humor, swag, and a focus on social issues. Each performance will feature an amazing special guest!
Why I'm In: Because Blackout Improv has some of the funniest performers in the Twin Cities and I am too old and sleepy to go see their usual late-night shows. AND social justice plus improv! AND fabulous special guests! PLUS swag! WHAT.

Much Ado About Nothing (as told by Dogberry and Verges). - by Rough Magic Performance Company
Shakespeare's classic comedy of love/hate relationships made modern by 6 women and 2 puppets. A hilarious and moving tale of love, jealousy, trickery, and redemption with a fresh and feminist perspective.
Why I'm In: Directed by Sarah Agnew and featuring six fabulous actors (Taj Ruler, Sara Richardson, Catherine Johnson Justice, Alayne Hopkins, Elise Langer and Kirby Bennett). Plus, love Much Ado.

It Can't Happen Here - by Sinclair Lewis Productions
A small-town news editor struggles with the election of a fascist demagogue to the US presidency in this Federal Theatre Project's 1936 adaptation of Sinclair Lewis' bestselling novel. Abridged for the Fringe.
Why I'm In: Because did you see that description? It's eerily appropriate. Maybe Sinclair Lewis has some words of wisdom for us.

Making It Home - by Delve Theatre
The largest population of Somalis in North America lives in the Twin Cities. Listen as a local ensemble of storytellers share their experiences of the joys and challenges of creating home in Minnesota.
Why I'm In: I still don't know enough about Somalis and Somali culture and life. I firmly believe in the power of hearing someone's story, and I really appreciate people who are willing to share their stories.

ODD MAN OUT - by Underdog Theatre
The death of a family patriarch summons James to his hometown in South Texas. Once he arrives, James is confronted with issues of the past and present. Nothing is left on the table in this world premier drama.
Why I'm In: Cause it's directed and written by Kory LaQuess Pullam, an incredibly talented young theatermaker and I firmly believe it getting in earlyish, so you can say, "Oh, I saw that award-winning playwright's show at the Fringe. I think it was back in oh, 2017?" Also, fabulous cast.

The Mysterious Old Radio Listening Society - by Ghoulish Delights
Thrill to two classic tales of terror from the radio's golden age, "The Shadow People" and "The Gibbering Things," performed in the style of an old-time radio broadcast, including announcements and commercials!

Why I'm In: Love the podcast of the same name, and love tales of terror from any age. Also! Eric Webster and Shanan Custer, who are also featured in Couple Fight 3: Weddings!

An elderly man suffering from dementia struggles to understand his situation and maintain a relationship with his daughter, even as he forgets how he ended up in a senior care facility.
Why I'm In: Although it's a challenging topic, it's also incredibly timely and worthwhile. And terribly close to home.

The Memory Box of the Sisters Fox - by The Winding Sheet Outfit
A circle. A seance. A story. A memory. A tale of two sisters who spoke to the dead.
Why I'm In: I find the story of the Fox sisters eternally fascinating. Also, the excellent photos on the MN Fringe write-up indicate a charming aesthetic.

Sevlin & Devlin Presents: Seven Evans in Heaven - by Ferrari McSpeedy Theatrical Productions
Join your hosts Sevlin and Devlin as they present the story of the battle for one Evan's soul. A very weird show in a very small venue.
Why I'm In: Joe Bozic, Mike Fotis, Erin Sheppard and Ryan Lear. Directed by Jason Ballweber. And is every actor really playing Evan? Hmm. I'm listening.

Repertoire Dogs - by Ideal Productions
A high-energy hour of celebrity impressions and cartoon voices "recast" into iconic movie scenes, plays, music, and more! Featuring a panel of well-known local performers and hosted by Josh Carson!
Why I'm In: Fabulous cast including the unmissable Allison Witham.


The End of the World Sing-Along Hour - by The Heavy Mettle Assembly
Has "Resisting" lost it's zip? Collapsing under all the crazy? Has your passion for protest paled? Let's fix that with SINGING! We'll sing lots of great, and two pretty stupid, songs. Let your voice be heard!
Why I'm In: Jennifer Eckes and Kevin Werner Hohlstein, who perform a charming cabaret act around town (often at Honey). Also, SINGING.

DUNGEON - by Hit the Lights! Theater Co.
A young man falls into the unknown to rescue the thing he holds most dear. Inspired by kabuki, video games, horror movies, and pixar shorts, DUNGEON builds a world where darkness speaks louder than the light.
Why I'm In: Cause that description sounds super neat. Sometimes it's just that easy.

There are SO MANY more shows to talk about, but it's time for me to start figuring out how in heck I'm going to see them all.

Happy Fringing, y'all!!
Posted by Carly