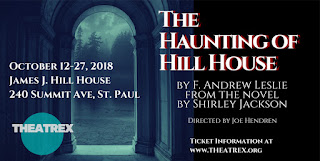 In October, we saw The Haunting of Hill House by Theatre X at the James J. Hill House, which we were SO on board with immediately.


Directed by Joe Hendren, with an adaptation by F. Andrew Leslie, this show absolutely lived up to our expectations. Skillfully staged with minimal props in the foyer/entry of the Hill House and performed beautifully by the entire cast, the show lived up to the beloved source material. One standout element of this show was the staggeringly effective sound design by Forest Godfrey. From cars pulling up outside to the spooky sounds that haunt the inhabitants of Hill House, the sound added so much to this production--especially considering this is not a traditional theater space. Just SO well done. Do it again, please! Every year.

Frankenstein - Playing with Fire at the Guthrie Theater (by Barbara Field) was a fascinating look at the well-known story. The play starts with a dialogue between the aging Dr. Frankenstein and his creation in the Arctic Circle, complete with massive iceberg. Although the beginning is essentially a monologue, the show is riveting due to the amazing performances by Elijah Alexander as the Doctor and Zachary Fine as the Creature. Engaging staging, wonderful acting (including Ryan Colbert as the young Victor Frankenstein) and lovely ambient sound by Cliff Caruthers added up to a lovely pre-Halloween evening at the theater.

Silent Night at Minnesota Opera - Saw this opera during its World Premiere run in 2011 and thought there should have been more singing, particularly by the extensive cast. Either it got better or I'm getting softer in my old age, because I quite enjoyed it this time around. Last time, Brad Benoit had to stand in for one of the leads who had laryngitis--he sang the part with a microphone from the side of the stage.

Sister Act at Phipps Center for the Arts - We've always looked a bit askance at Sister Act. Although the movie is amazing, reports from the Broadway production (cartwheeling nuns!) seemed less than appealing. We even skipped the production at Chanhassen starring the amazing Regina Marie Williams, who can do no wrong. So we went into this production a bit leery and ended up pretty charmed. It was fun, fast-moving, well-choreographed and well-designed. The performances were pretty wonderful as well, with Kayla Kauffman as a strong Deloris Van Cartier. Other standouts included Matthew Hall as Eddie, who is absolutely one to watch. 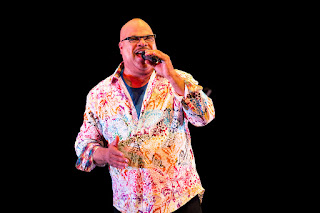 Present - T. Mychael Rambo at Illusion Theater - A new one-man musical story of how T Mychael Rambo has been “present” in his life with music, and how the songs and stories are a “present” he gives to the audience. We could not love T. Mychael Rambo more. From years of watching him as the preacher in Black Nativity at Penumbra Theatre to him being amazing in nearly everything he does, he is always a treat. This show, with musical accompaniment by Roberta Carlson, featured a number of personal (funny and poignant) stories and songs. Standout songs included a few gorgeous renditions of Sondheim songs, a cover of "Defying Gravity" that made us rethink our stance on Wicked, and an utterly beautiful version of "Make Them Hear You" from Ragtime. Just lovely all around.

She Kills Monsters at Hamline Theatre and Dance - After seeing Qui Nguyen's Vietgone at Mixed Blood, I vowed to see more Qui Nguyen plays as soon and often as possible. I'm keeping to that promise. She Kills Monsters is an amazingly complex and funny story of a young woman's venture into fantasy role-playing games to help her understand her little sister after her sister's unexpected death. Fabulously acted and beautifully designed, this show deserves a special shout-out to fight choreographer Mike Lubke and to design supervisor Bill Wallace (that DRAGON!). This made me resolve to keep college theater on my radar more.

Prescient Harbingers at Mixed Blood Theater - This series is three plays performed in repertory and all written by African-American provocateurs. We saw all three plays on the same day and were STAGGERED by the craft and content. The three plays were Gloria by Branden Jacobs-Jenkins, directed by Lavinia Jadhwani, Hype Man. A Break Beat Play by Idris Goodwin, directed by Shawn LaCount, and Hooded or Being Black for Dummies by Terrance Arvelle Chisholm, directed by Thomas W. Jones II. All were fantastic and thought-provoking and wonderfully acted, particularly by William Thomas Hodgson, Nathan Barlow and Kathryn Fumie.
Posted by Carly