If you see one play this year, go see Roe at Mixed Blood Theatre. DO IT. GO. BYE.

About:
"Roe, a theatrical survey of the complicated and fiery underpinnings of Roe v. Wade, the U.S. Supreme Court ruling that established a womxn’s right to an abortion. Roe precisely illustrates the fractured and fracturing history of one of the most polarizing social issues of the modern era. Sarah Weddington was a 26-year-old lawyer when she argued Roe v. Wade, and accidental heroine Norma McCorvey was a 22-year-old poor, hard-living lesbian bartender seeking to end her third pregnancy when she first agreed to be the plaintiff under the pseudonym 'Jane Roe,' decades before she renounced her involvement in the case and became an anti-abortion advocate."

What We Thought:
Holy cats. Where do we start?

Roe, by Lisa Loomer, was commissioned by the Oregon Shakespeare Festival in 2012 and has played several festivals around the country. However, it has now been optioned for Broadway and Mixed Blood Theatre is the "only regional theater in the country that has been given permission to produce it this season." And what a production they have created. If the Broadway producers have any sense, they'll come to Minneapolis, scoop up this entire cast and this exact production, and bring it all to New York.


Here's the thing: Roe is a really, really good play. Lisa Loomer weaves together all of the complicated elements and emotions surrounding the incredibly polarizing issue of choice and creates a balanced, clear-eyed and resonant play. She uses the participants' own words to bring the story to life, and her characters contradict each others' accounts when their recollections don't quite match. It's a lively and engaging technique, which the playwright uses to powerful effect.

And this CAST. Tracey Maloney plays Norma McCorvey (aka "Jane Roe"). Maloney takes this complicated, conflicted and divisive character and brings her utterly to life. She is, in turns, sympathetic, irritating, and achingly relatable. Laura Zabel, as lawyer Sarah Weddington, is perfectly buttoned-up and determined, though we eventually see she has her own history and issues.

Every element of this production, directed by Mark Valdez, is perfect, from the music that heralds the beginning of each new era, and the lights and projections that add to the strong sense of place, to the seamless use of real audio from the Supreme Court, and breaking of the fourth wall. The pacing is incredible and emotional resonance is profound. Even for those of us with short attention spans (aka Carly), the play absolutely raced by in seemingly ten minutes. One of the things we loved and admired best in Valdez's direction is that he keeps the play so tight that there's no room for the kind of self-satisfied applause that can so easily disrupt the energy and mood of a play.

Mixed Blood always does great outreach work, but with Roe they have gone even farther, hosting two "book club" discussions of the script in the weeks leading up to the production, and working with community partners for post-show talkbacks and hosting continuing legal education sessions around the play.

If you leave the play, as we did, wanting to explore more about Roe v. Wade and the current state of choice, may we suggest the following? 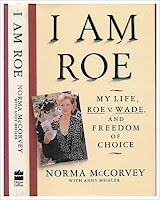 Books mentioned in the play:

I Am Roe: My Life, Roe V. Wade, and Freedom of Choice by Norma McCorvey and Andy Meisler (1994)

Amazing Info from Planned Parenthood about Roe v. Wade: Then and Now Read and/or listen to the actual case summary and decision from 1973

The Cut offers a reading list of articles for the 45th Anniversary of Roe V. Wade

For a mix of fiction and nonfiction books on the topic, try Bustle's 20 Books to Read on the Anniversary of Roe V. Wade