Did I mention that I heart Twin Cities Horror Fest, now in its fourth year?  Cause I really do. 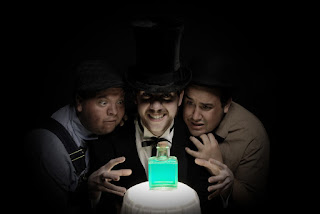 "A tonic with seemingly miraculous properties; Three con-men beginning to believe their own pitch; And a perfectly ordinary trunk containing...? A traveling medicine show from Four Humors."

Seeing this show first on our four-show day raised the TCHF bar to crazy heights. Mortem Capiendum makes me wish that theaters were more like movies, where you could just stay for the second show.

From the first moment that Brant Miller walks out on stage with his banjo to the last chilling minutes, this play is hilarious, chilling, suspenseful and completely delightful.

Matt Spring plays Prof. Johnathan St. Miracle, a huckster who is selling the eponymous immortality tonic. The utter waterfall of words that tumble out of St. Miracle is stunning--it's a perfect depiction of the Depression-era, fast-talking hustler. Brant Miller, as Eustis, his right-hand man, has an open, guileless face that make his deadpan comments even more hilarious. And as Lloyd, Jason Ballweber creates a fascinatingly complicated character.

With minimal staging, props and lighting, this show is all in the writing (by Ballweber, Miller, Spring and Matt Ryan) and the acting. Each of the actors goes through some serious character transformations, which is pretty amazing, given the short length of the show. (Of course, they have been working on it for a while.)

I love that the Twin Cities Horror Festival gives me the opportunity to check out theater companies whose work I haven't seen before. And it's SHAMEFUL that I've missed Four Humors so far--I'm embarrassed to say it. I won't make that mistake again. And I'm definitely putting their next production: The Ingenious Gentleman Don Quixote of La Mancha (May 13 - May 22, 2016 at the Dowling Studio at the Big G.) on my calendar.

If You're Sensitive and/or Delicate: Don't forget to check out Twin Cities Horror Festival's handy genre and ratings guide.

In Short: Go see it!

PS: Dear theater companies: Giving a treat/bribe as Four Humors did for filling out a survey?  Works for me!
Posted by Carly