Review - The Night Alive at the Jungle Theater

This may sound crazy but after almost 20 years I finally made it to the Jungle Theater. All my theater-going friends think I am crazy for waiting this long, and I now am agreeing with them. My first show there was The Night Alive--also my first Conor McPherson show, but certainly not my last.

First off, the theater is gorgeous - both the lobby and the house itself. I like that it looks large but is still intimate. I also love how the seats are set up. I was sitting in the front row of the "back section" and loved the leg room. The house is comfortable. The audience was somewhat mixed regarding age however not much else. Now, what about the show?

This is the third Conor McPherson show that the Jungle Theater has produced. Previously they produced "Shining City" which deals with a ghost, "The Seafarer" about the Devil, and now "The Night Alive." Having not known or read any of Conor McPherson's work, I was expecting some shocks, something supernatural, some violence - everything that lends itself towards a great play for a cool autumn night.

The story is about Tommy (Stephen Yoakam), who lives in the drawing room of an Edwardian house that his uncle Maurice (Martin Ruben) owns. On occasion his friend Doc (Patrick Bailey) crashes on the cot in the corner of the same room. One night, Tommy brings home Aimee (Sara Richardson), who was beat up by someone. She is bloody and bruised and he takes care of her. They form a friendship and it seems like it is becoming more than a friendship. On the other hand, Doc states that Aimee is a prostitute. 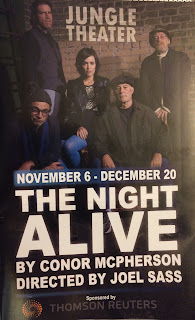 And I think that is all I'm going to say - or all I can say without giving away too much of the plot. The set of the drawing room fills the stage, and is very realistic...to the point of having running water on stage.

It is a single set show, just over 90 minutes with no intermission. It was near perfect. Stephen Yoakam was fantastic and also on stage for the majority of the work. The relationships between him, Doc and Maurice are clear and yet you can see subtle changes to them as the play progresses. Tyson Forbes plays Kenneth - wow. He is a giant on stage and was truly amazing. I had only seen him in TigerLion Arts production of Nature previous to this. I will see him in anything he does from here on out. In fact, the whole cast is solid and a true joy to watch on stage.

The script has its funny moments but also reminded me quite a bit of Pinter - in the sense that you think you know where it is headed then suddenly a violent action takes place and things change. That was how I saw the show - showing us how random acts can affect our lives in good and negative ways. And yes, there is violence. Not to the point of Martin McDonagh (from what I know) but still shocking and bloody.

Go see this show. It plays through Dec. 20th and was a really intense and enjoyable piece to watch.
Posted by KRL