Ivey Award winning Green T Productions states that their mission is "To produce visually stunning, mind-stirring, movement-oriented, multi-disciplinary physical theater that artistically challenges performers and audiences." They are led by Dr. Kathy Welch who studied Japanese theater for over ten years in Hawaii and Japan. She spend 2 1/2 years living in Japan doing research for her dissertation on kabuki theater. She also studied kabuki acting, and kabuki dance. From her biography in the program, she has extensive experience with various Asian theater forms with a focus on Japanese theater. Her current show "Tales from Rashomon" is playing at the Historic Mounds Theater. Rashomon is a story from a collection of stories by Ryunosuke Akutagawa. 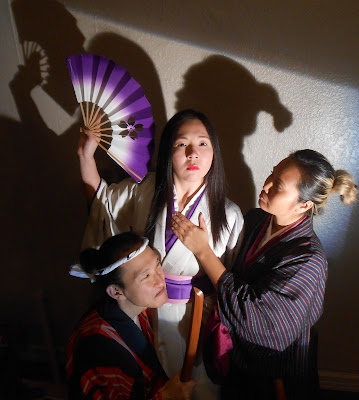 Rashomon is probably best known from the film by Akira Kurosawa. The film tells the story of a murder from the various viewpoints of witnesses, primarily a Bandit, a Wife, and the murdered Samurai. However through all the stories you never really find out what happened as everyone has their own version of the truth. The set had four cave-like spaces, a wide and deep staircase that let to a playing space on top of the caves and a bridge across to the top of two more caves and an alcove. While the set took up most of the stage, there was a space on the right for the musicians, as well as an alcove above the musicians. The band consisted of taiko drums, koto, and shakuhachi. Also sitting behind the musicians was a ladder with a few shinto shide hanging on it. Each of the alcoves had a figure in it - it looked to be made of plaster.

The show starts with a chorus of disaster refugees from different time periods coming on, carrying a body. They had some stylized make-up, worn out costumes and eventually they helped tell the various stories. After they set the body down at the top of the stairs, they each spoke sentences or two that they repeated occasionally through the opening. These made very little sense but I took note thinking they would circle back and make sense at some point in the show. Out of the alcove above the caves, the plaster figure breaks apart and a woman appears. She coughs, hacks, gags (which was understandable at first but was very disconcerting when she continued these sounds through out the whole show), and had a very "Gollum" feel about her. She was dressed mainly in white with a white covering over her head, and stylized white make-up on her face. Her mannerisms were very low to the ground, hunched over like the beggar woman she was. She went to the body, pulled off some clothes for her own use, found the briefcase the corpse had with him, then proceeded to pull out a hair from his head. A servant comes down through the audience wearing a shirt and tie, gets on stage and starts to look for shelter. The beggar woman convinces him to read the contents of the briefcase and the stories of the murder begin. Only later did I realize that these two characters are based on the actual story called "Rashomon." The stories of the murder are actually from a Akutagawa story called "In the Grove." 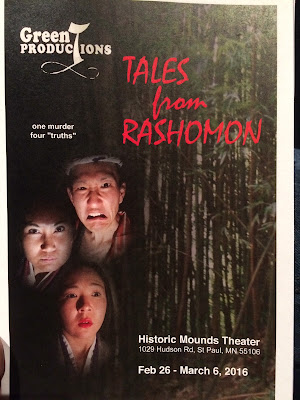 Each of the stories relating to the murder were told in a specific Japanese theater style. The first was told in Kabuki, the second in Noh, and the third in Bunraku. Having grown up in Japan, I am quite familiar with Kabuki, and am a big fan. I am aware of the other two styles and have seen portions of them on TV but never live. That being said I probably walked into the theater with higher expectations than the rest of the audience. The Bandit's story is told in a Kabuki style. It contained stylized movement and vocal patterns which could have been seen as parody if you didn't know the background to it. Personally, hearing English spoken as if it were Japanese in a Kabuki-style was disconcerting - especially when the Japanese names were not pronounced correctly.

The Wife's story was told in a Noh style. The chorus sat in front of the musicians and sang while the Wife told her story mainly through movement and dance. At the same time, the servant is also reading parts of the story. It was lovely to watch though at times difficult to understand.

Finally the Samurai's story is told via Bunraku.  Considering the Samurai is the one who was murdered, the beggar woman helps bring his spirit back through an extended movement/dance section - including some breakdancing. His spirit comes into the puppets and the full cast tells his story. This section was also very lovely to watch. The way the puppets were manipulated and used was very skillful. Traditionally two of the three people manipulating the puppets are dressed all in black with their faces covered so that you can focus better on the puppet. While this was not the case here, the story was still very well told.

The three lead characters - Bandit, Wife, and Samurai were all played by actors of Asian descent. The costumes for each were wonderful, though I did miss the stylized Kabuki make-up. They were the only three (beyond the servant) who did not have some sort of stylized make-up on. The music through out the work was very nice, though some of the melodies may have been over-utilized.

If you have never been to the Mounds Theater, it is a renovated movie house so the stage is raised and the seating is slightly raked. It is a bit cavernous but, with the exception of no backstage, it seems to work well for theater. They have lovely art deco decorations on the walls and it has a good feel to it. If you have never been to a Green T Production show, I would recommend going to one with a talk-back after the show. If you are new to Japanese or Asian theater styles, the talk-back should give you an opportunity to ask questions about them. While I may have been disappointed with this specific work, I will be back to see more. I am intrigued by the work they do, and to see how Dr. Welch uses her training and knowledge. For extra resources, follow the links above. I would also recommend doing a youtube search on the various styles. I have created a small primer below.