Silence! The Musical - Minneapolis Musical Theater at the Lab 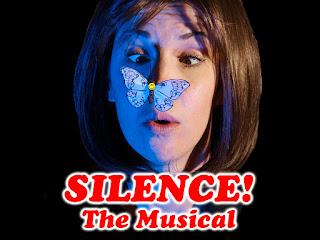 Silence! The Musical (showing now through March 6 at the Lab Theater) is almost definitely the best parody musical based on a horror film that you'll see this year.

Released in 1991, The Silence of the Lambs won five Oscars and scared the hell out of millions of people. Now that it's an indelible part of pop culture, why not make it a musical? And I can't think of a better local theater than Minneapolis Musical Theatre (and Steven Meerdink's Bitter Boy Productions) to take on this show.

You know the story: FBI fledgling Clarice Starling is sought out to interview famed serial killer Hannibal Lecter in order to find yet another serial killer. Although much of the original movie's script has become go-to pop culture punchlines (liver with fava beans and Chianti, it puts the lotion in the basket, ffffffftttttt) the movie is still genuinely disturbing.

So how can this possibly be a hilarious musical? (Which it IS.) Well, it starts off with a fabulously witty book by Hunter Bell, and music and lyrics by Jon & Al Kaplan that manage to be truthful to the source material and tuneful, while hilarious and shocking at the same time.

And then, if you're Minneapolis Musical Theatre, which specialize in musicals rarely seen by Twin Cities audiences (their tagline is "Rare Musicals. Well Done."), you give it 112%. Every member of the cast performs with utter commitment and director Steven Meerdink creates the perfect tone.

The cast hits every joke in the script perfectly, and finds a few laughs that probably aren't in the script, yet never ever milks a joke. The show also has musical theater references that theater fans will love to pick out. You'll note references to Bob Fosse's choreography, Will Rogers Follies, Evita, Cats, and the King and I. These nods add an additional layer of fun to an already hilarious show.
The cast is spot on, referencing the actors' work in the film, but bringing it slightly over the edge in a hysterical way. From the moment that Emily Jabas sprints (slowly) on stage as Clarice Shtarling, you know it's going to be good. Tim Kuehl as Hannibal Lecter gives a delightful blend of menace and confusion, despite acting mostly behind glass and a mask. Alice McGlave gives a great boost to the thankless role of Ardelia (one of film's first black best friends), and Jordan Oxborough was a perfectly insane Dr. Chilton.

My personal favorite performance was by Ryan London Levin as Buffalo Bill. Originally played by Ted Levine in a balls-out, Gene Loves Jezebel-dancing, putting-the-lotion-in-the-basket, Precious-loving performance, Buffalo Bill is one of the most vivid characters in horror. Starting with his first song, "Are You About a Size 14?", Levin gives everything he has to this character and hits it perfectly. He gets Levine's (Levine/Levin/WHAT?) weird mumbly voice perfectly right, and actually has a fantastic singing voice. The entire chorus, including Gregory Adam (so good in MMT's Eating Raoul) and Daniel Lundin (excellent in this season's Murder Ballad) give amazing performances in a variety of roles.

The show is at the Lab Theater, which I hope Minneapolis Musical Theatre can use for future shows. The warm and inviting--but bare bones and industrial--space is perfect for a show like this. The beautifully constructed set by Darren Hensel made perfect use of the space, and the props by Valerie Larche lend a realistic (yet over-the-top) tone to the production.

By the way, if you are faint of heart and delicate, you may be shocked by some of the material in the show. Hannibal Lecter's first song (of which the Washington Post said the title was too dirty to even hint at) uses a word that is rarely used on the American stage or in film. Hint: It starts with "If I Could Smell Her", and references a line by Multiple Miggs. That's all I'm giving you. But I you pass up this fabulous, hysterical show because of that, well, I would be sad. Go see this fun show!


PS: Every program received a postcard to help promote the show with a 20% off discount code. I don't feel right posting the code, but you could always mention you read about the discount in this review from us and maybe the box office will give it to you. Or check MMT's Facebook page for deals.

(co-written by KRL, Carly and Jules)
Posted by KRL