If you are looking for an amusing, humorous, witty, satirical, charming, laugh-inducing show to see some night, then I have a show for you. Did I mention it is funny? Buyer & Cellar, now playing at the New Century Theatre and presented by Hennepin Theatre Trust, is a one-person show about an actor who finds himself working for Barbra Streisand...sort of. The play is written by Jonathan Tolins (who has film/tv experience as well as some Broadway experience) and was inspired by Streisand's book "My Passion for Design." This 2010 book was written by Streisand, with photographs by Streisand and is all about her home in Malibu. The inspirational part is that Streisand has a barn on her property and in the basement of this barn are most (if not all) of her collectibles. However instead of just storing them, she has them set up in various shops - a doll shop, an antique clothing store, a candy store with frozen yogurt and popcorn, etc. THIS fact is what inspired the play Buyer & Cellar. The actual plot of the play is all fiction. 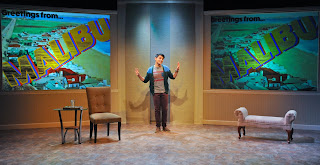 We are brought into Streisand's world as soon as we step into the theatre as the pre-show music is all her. The set is perfect and simple - a blank stage with a backless sofa/bench on one side, and a table and chair on the other. Behind each of these set pieces are screens which have projections of cityscapes (of California, and Malibu) along with photos of the locations the scenes take place. Some of the location photos were taken from Streisand's book (which is featured on the table, along side a glass of water), though some of the projections were blurry giving them a dream-like feel. 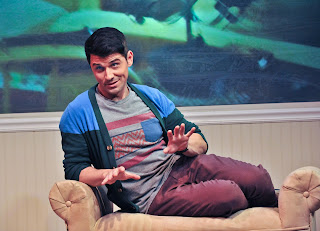 Another simple facet of this show is that there is one actor. Now one person shows can be very tricky to pull off. You must have a talented actor who can convincingly play all the parts, but more than that you need an actor who has a voice, energy, and a look that makes the audience want to spend time with them, and who enjoys spending time with them. Sasha Andreev has all of that in spades. Directed by Wendy Knox, Sasha plays at five or six characters. In my mind, there are more because it came across to me that Sasha played a flamboyant actor who sets the stage (reminding us that the mall is truth but the rest is fiction), then this same actor became Alex.

Alex is open and wanting to share his life and bring you along on his journey about working in the mall. Along with Alex, Sasha portrays Barry (Alex's boyfriend) who has a gruff, Fierstein-esque voice, a strong New York accent and rough mannerisms. We meet Sharon, the gum-chewing judgmental manager, along with James Brolin (a perfect interpretation) and finally the lady of the house. Andreev does not impersonate Streisand. As Alex states in the script - there are plenty of Streisand impersonators out there, some of them are even women. Because of that Andreev gives a portrayal of Streisand without impersonation - gestures, the voice, the speech patterns and slight accent, the facial looks that are given...perfection.

I won't give away any story. I will say that the script has a fantastic eye for detail. It is witty, a bit catty, and is funny through out. Jules and I were laughing almost non-stop. The script also makes some great observations on how people think of stars, and how stars think of non-star people. It speaks to the bitterness that can arrive from a tough childhood, as well as diving into some Streisand films and pointing out that they always seem to be about her getting with the person who says she is pretty. Through out the show there was fantastic underscoring made of great orchestral hints of Streisand, yet with no vocals. Musical hints to keep you in the Streisand frame of mind. I felt there was one misstep when the underscore changed to Portishead, however the more I think about it, the more it fit that specific moment. It sticks out because it was so different from the rest of the underscoring. 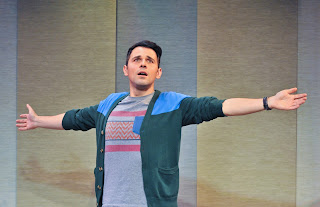 Needless to say, if one very small underscoring moment is all I can remember that was "negative" - well, who cares. The show did one thing that I love from theater. It makes me interested in going back to watch some Streisand films (and Judy Garland's Summer Stock). It had a wonderful story and message. This intermission-less (100 minute) show is fantastic - script, set, production and most of all the actor. Sasha Andreev is charming, smart, funny, has some incredible moments on stage, and creates magic.