Park Square Theatre has assembled an amazing cast for the local premiere of Calendar Girls, playing through July 24. Playwright Tim Firth adapted the script from the 2003 film, which he co-wrote with Juliette Towhidi. If you have seen the film, you know the story, but the joy of the play is spending time getting to know these realistic women and seeing their friendships develop and deepen.

The play features the talents of actresses Charity Jones, Christina Baldwin, Linda Kelsey, Carolyn Pool, Laurel Armstrong, and Shanan Custer as members of a Women's Institute (WI*) group in Yorkshire, England, who take off their clothes for a charity calendar. The supporting cast is also impressive, including John Middleton and Bill McCallum as two of the ladies' husbands, Ryan Colbert as their photographer, and Julia Cook as the group leader who is always just a little too perfect. Karen Weber, Anna Hickey, and Kory LaQuess Pullam are also strong as some of the people who alternately help and hinder the cause.

The WI meetings seem a bit silly at first, with much talk of broccoli and tea towels, but then we discover that John (Middleton), husband of Annie (Baldwin) is very ill. As time passes, marked by the seasonal activities of the group, the loss felt by all of the women when John dies is apparent. Chris (Jones) and Annie think of a way to memorialize him. Rather than their planned calendar of the bridges of Yorkshire, they will pose nude—tastefully, of course—to raise enough money to purchase a new settee for the family waiting room at the hospital.

Some of the women need more persuading than others, but watching them support each other through this experience is really touching. Oh, and funny! It is a delight to spend a couple of hours with these women through their laughter and tears. In spite of the subject, Calendar Girls never gets sappy. It is a treat to be able to watch these gifted actresses together on stage. While it's not unusual to see a play with multiple juicy roles for middle-aged men, it's not as common for women. And these well-rounded roles give the performers the chance to have their characters grow and develop. I can't say enough nice things about the whole cast, but I have to single out Shanan Custer. Her Ruth is funny from the moment she sets foot on stage, but is also so familiar as a timid people-pleaser that the audience can't help but root for her to stand up for herself. 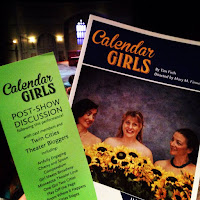 Well-paced by director Mary Finnerty, with spot-on costumes by MaryBeth Gagner, the story plays out on a simple set by Michael Hoover that is enhanced by Michael P. Kittel's lighting. All the technical elements support the story beautifully. Calendar Girls is a delightful and touching play that took our audience on an emotional journey that felt like the kind of shared experience that only live theater can provide.

Many thanks to Connie Shaver and Michael-jon Pease for welcoming the Twin Cities Theater Bloggers to participate in a pre-show meet and greet and a post-show discussion at Sunday's matinee. Thanks also to all the actors for sharing their time at the discussion as they were wrapping up a very busy opening week. We had a great time, and hope to participate in more events that expand the conversation around the great theater we have here in Minnesota!

* When I looked for information on the Women's Institute (WI), I found this story about how the organization has been a force for progress in Great Britain for 100 years. It's quite a bit more than tea towels and broccoli!
Posted by Jules