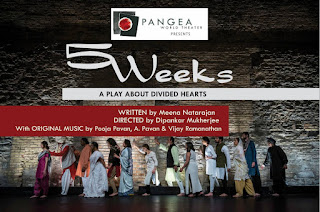 Going into Pangea World Theater's new play at the Lab Theater, I knew next to nothing about Partition, the term used for the post-WWII division of formerly colonial India into the countries of India and Pakistan.

Five Weeks: A Play About Divided Hearts, written by Meena Natarajan, is a heartrending, personal look at Partition and the many human costs that ensued.

A bit about Partition: In 1947, the British government assigned a lawyer to draw the new border. Sir Cyril Radcliffe had no experience in India, or with drawing borders, and within five weeks, had drawn a border that allowed little consideration of demographics. Despite a stated intention to keep most Sikhs and Hindus in India and most Muslims in Pakistan, the reality was much more complicated.

After thousands of years of coexistence, Partition divided up shared communities, neighborhoods, and social circles. As families migrated from one country to the other, about a million refugees were killed, millions more were displaced, and an estimated 75,000 women and children were raped and abducted, most of whom were never recovered.

Natarajan's script weaves together stories of families and friends divided by Partition, bringing the massive carnage to a very personal level. A child is separated from her parents during their flight, a college-educated woman naively tries to help refugees, and a family finds its home no longer safe in just a few of the stories woven through the evening.

Projected captions indicate place and time, and also provide translation of some of the dialogue, which includes Punjabi, Bengali, Hindi, and Urdu as well as English, sometimes in the same conversation. Live musical accompaniment is performed by singer Pooja Goswami Pavan, tabla player and vocalist A. Pavan, and keyboard player Vijay Rmanathan.

Local actors of South Asian descent make up the acting ensemble and all play multiple characters. With a number of first time performers onstage, the performances can be a bit uneven, but the emotional resonance is clear. Madhu Bangalore, Tarun Kumar, and Prakshi Malik gave standout performances, imbuing each of their characters with incredible depth and emotion.

If you'd like to learn more about Partition and its aftermath, Pangea's program is informative, and they also have an extensive study guide on their website.

The website also features the personal stories of how Partition affected the cast members and their families, making it clear that this is not ancient history, but recent and real. The study guide and program also include a timeline, an explanation of terms used in the play, and a suggested reading list.

Although I came to this play with very little knowledge about the situation, the stories and characters were incredibly moving and made me want to learn more.

Pangea World Theater's mission is "Pangea illuminates the human condition, celebrates cultural differences, and promotes human rights by creating and presenting international, multi-disciplinary theater." I think Five Weeks does all of these things beautifully, and I'll be following Pangea's work with interest.
Posted by Jules