I Shall Be Redeemed: Wise Blood at The Soap Factory (Guest Post!)

In the entire canon of literary fiction, the novel Wise Blood by Flannery O’Connor would surely be placed in a special section of the exceedingly bizarre, as would all the work of this enigmatic author. The tale in many ways defies description, which brings us to The Soap Factory's retelling of the novel as an immersive opera (co-presented and co-commissioned by Walker Art Center.)

Flannery O’Connor wrote in a Southern Gothic style, creating grotesque characters, many of whom are in spiritual crisis and searching for redemption and truth. In Wise Blood, the damaged Hazel Motes rejects common religious beliefs and sets out to establish an anti-­religious ministry in a small southern town full of equally eccentric and colorful characters. First off, the production was probably the most bizarre and unique theater experience that I have ever had. It’s important to note that I didn’t say best.

As you probably know, The Soap Factory is a 130-year-old warehouse. Wise Blood is billed as an opera exhibition and consists of set installation pieces created marvelously by Chris Larson, around which the whole production revolves. The audience is invited to take the journey with Hazel Motes as we travel, directed by volunteers, from one set piece to another as the story unfolds.

The orchestra also has various sites situated near and sometimes farther back from these installations, so they are on the move, as well. For most of the 90-minute presentation the audience is standing. They did have benches set up where one could sit down for some of the longer scenes. The thing is, you never knew exactly where the action was going to occur. Sometimes the actors would be right in front of you or in the middle of the audience, other times they may be up on a platform or in a railroad car or automobile, which would be moved alongside the audience by stage techs. 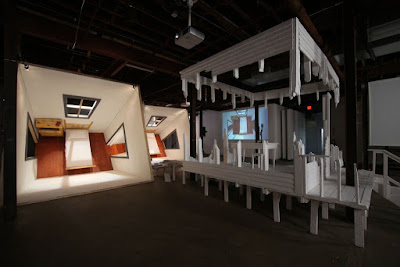 One interesting set piece was the boarding house, where Hazel stayed. The beds were tilted upward at an angle where the performer could stand on the bottom base board and he appeared to be lying down on the bed. The show also used some rear projection, which was a good thing, when you might have wandered to a spot in the warehouse where it was difficult to see because you were too far removed from the action.

The production was for the most part well sung, with special shout outs to baritone Brian ​Major and tenor Martin Bakari, composer David Lee Echelard, and Anthony Gatto and the Adam Meckler Orchestra. The music at times seemed discordant and jarring and even overbearing, but fit the tone of O’Connor’s dark and gloomy tale. One peculiar thing is that the actors used hand mikes, which lent an odd note. Also, I think it would be good for patrons to do some homework for this type of performance beforehand in order to familiarize yourself with the storyline. It was too difficult to read the scene descriptions in the program in the dim theater lighting. The words to the songs were also hard to decipher at times, even though they were in English. It would be impossible, however, to project them anywhere, with the audience on the move. The more one knew about the piece beforehand the better off the theater experience would be. I only had a vague recollection of the novel and the John Huston film (1979) but it was enough to get the gist of the crazy, upside down world of Flannery O’Connor in a extremely unique presentation.

Despite any quibbles, just being a part of this marvelously unique show was special enough for me! I’d recommend an immersive show like this one in the future for a unique theatrical experience. (Contributed by rickjallen)
Posted by Carly