Review: Once at the State Theatre Many saw the film Once and saw it as a love story that also dealt with the power of music. Then it was noted that the film may have been semi-biographical about the relationship between Glen Hansard and Marketa Irglova. Once then became a best selling soundtrack, was nominated for two Grammy Awards, and also won the 2007 Academy Award for best original song for "Falling Slowly." Finally it became a Broadway show - winning eight Tony Awards (including Best Musical), along with a Grammy Award for the cast recording.

Honestly, I wasn't taken with the film. I thought it was sweet and charming but something about it didn't really work for me. Of course, I enjoyed the music but I didn't really see the passion in the film. There were awkward moments, and charming moments but nothing that really caught my attention, or moved me. And while I did listen to the soundtrack a few times, it wasn't all that inspiring or moving to me.

Then I saw this on the Tony Awards.

I was moved to tears. That clip right there tells you almost everything you want to know about the show before seeing it. It is folksy, has a small yet incredibly talented cast, abstract choreography that works magic and it is clearly about the passion for music and the passion for kindred souls.

Seeing the show last night, there was so much that I was taken with. The audience is invited on stage before the show and during intermission to grab a drink from the onstage bar and get immersed in the set. The set is a semi-circular Irish pub set with a bar at the back. Above it on all three sides are brick walls set in a square - giving the impression that you are seeing the back of the theatre space, as well as giving a sense (to me) of being blocked, stuck with no escape. Towards the start of the show the cast comes on and mingles with the audience. They then turn to the folks still on stage and start playing songs. As the audience trickles off the stage and to their seats, the cast turns and starts playing to the full house. They each take turns playing a song, and finally they turn to one guy who says he doesn't really have anything to play - and yet he starts playing "Leave". The house lights slowly go down and the show has begun. What a fantastic way to start. It creates a bond between the audience and the cast right away and the cast never leaves the stage. They sit in chairs along the sides and provide additional instrumentation, and backing vocals when needed. They also provide underscoring for certain scenes in the most imaginative and simple ways. 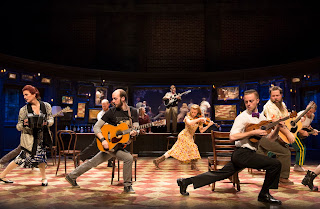 I think this is the heart of this show. It tells a simple story about the power of music to bring folks together. It also shows how the support and belief of one person can make a huge impact in another persons life, and by doing so - impact them both. The lead characters have no names. Stuart Ward plays "Guy" while Dani de Waal plays "Girl." They both have fantastic voices and great stage presence. The character of "Girl" is Czech, and there are some portions of the show where the characters are speaking in Czech. However they actually speak in English with Czech supertitles show above the bar. I found this to be a wonderful way to show the difference in language. Simple and imaginative.

I could write a few more paragraphs about the wonder that is this show. It is moving and funny and powerful. It is simple and grand. It has some of the most beautiful vocal arrangements I have heard in a long time - the acapella version of "Gold" in Act Two is quiet and stunning. Suffice it to say that Once is a show that you will enjoy, if not love. And if you love the movie, you will LOVE the stage show.

note: all photos by Joan Marcus
Posted by KRL