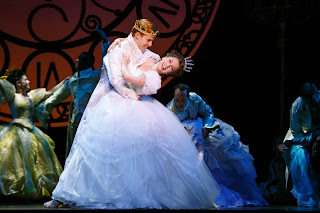 Yes, the title of the post says almost everything I want to about Rodgers and Hammerstein's Cinderella. The show was originally written by Rodgers and Hammerstein for a 1957 Original Television Musical starring Dame Julie Andrews as Cinderella. It was then staged in 1958 at the London Coliseum. In 1965 it was remade into another television special starring Lesley Ann Warren. It wasn't until 1993 that the New York City Opera staged a version and restaged/revived it in 1995 and 2004. In 1997 it had another television remake - this time starring R&B performer Brandy as Cinderella and Whitney Houston as the Fairy Godmother. It has played in High Schools around the country but in 2013 it debuted on Broadway for the first time ever. This show features a new book by Douglas Carter Beane. It includes all the songs from the television musical as well as some songs from the trunk (meaning songs written for other shows but cut or adopted for this work). 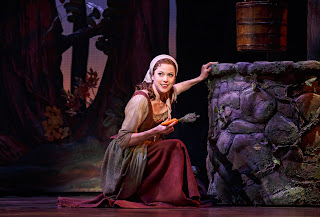 The story of Cinderella is well known. It is based on the story by Charles Perrault who based it on folklore of his time. This story is similar to other stories around the world - the story of Ye Xian in China, or Chinye in West Africa, or even Rhodopis in Egypt.  The story has even been told in writing from the viewpoint of an Stepsister. A girl's parents both die and she is raised by a stepmother who treats her unkindly. The Prince of the land gives a ball so that he can find a wife. The stepmother and her two daughters go and leave Cinderella at home. A fairy godmother intervenes and...well, you know the rest. The story of the show follows this fairly closely. There are a few changes from the original TV film as well as from the Disney animated film. One of the biggest changes is that Cinderella takes more control of her destiny. When she first leaves the castle, she trips and leaves one of her shoes behind. She grabs it and runs off. The second time she leaves, she purposefully hands the
shoe to the Prince. 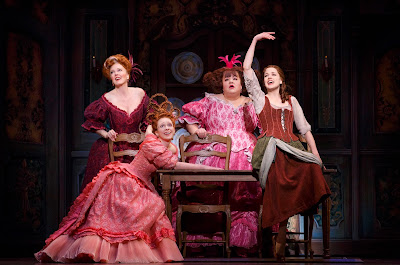 The Orpheum has a wonderland on stage. There is an amazing forest set that fills the stage when you walk in. And when the cast comes on stage - the whole stage is filled with people or set. It is wonderful and charming. The story is certainly for the kids but there is some political content that helps keep the adults entertained as well. It is also very clear that Ella is all about compassion and kindness. The set, story and cast were as good as you could want them. The music and singing were pitch perfect - 23 songs filled with perfect characterizations and wonderful voices. In fact there are a total of 26 pieces of music through out the night (up from the 15 from the original TV broadcast). This keeps the show flowing and magical. And speaking of magical - the transformations!! During Act 1, Crazy Marie throws off her hood, turns around and is transformed in full view to the gorgeous, purple-gowned Fairy Godmother. Soon after that Cinderella is transformed (also in full view) from her raggedy dress to a wonderful white ball gown and tiara. True stage magic which earned it's applause. There are a few moments of magic in Act Two as well that are as astounding and surprising! 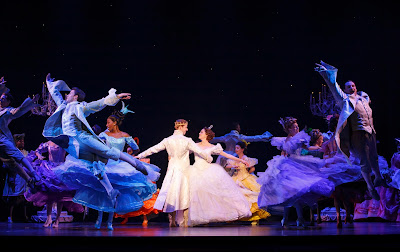 The other astounding part of this work is the dance. The choreography is not your typical Broadway hoofing. It leans far more toward ballet and it is used through out the show. Visually there is always movement and something catching your eye. The dance at the ball was lovely and gorgeous and a feat of strength with lifts like you rarely see on stage. I appreciated that they allowed time for these dances and trusted that the audience would be mesmerized by them - and they were.

The show runs over 2 hours long. The audience was filled with young girls and yet it was very quiet. The kids were paying attention and clearly loving every minute. And there was so much on stage to love. It truly was a lovely and enchanting night of theatre. A night I wish everyone could experience at some point.
Posted by KRL