I had my first, though not my last, experience with Open Window Theatre recently. The space is a versatile space that was set up in a thrust design for this show. The chairs are comfortable, wide and have tall backs. Personally I felt they leaned back a bit too much, making it difficult to be comfortable when sitting on the sides of the thrust - especially the front row. However the show I saw kept me interested and in thrall despite that fact. The space has good acoustics and is set in a building that is tucked away just north of 394 in downtown Mpls, yet was easy to find. So...on to the show itself.

The show "Sister Calling My Name" was written by Buzz McLaughlin and was the winner of the 1996 National Play Award. It is the story of Michael (Jeremy Stanbary) who has to face his past when his mentally disabled sister Lindsey (Elizabeth Efteland) is starting to get recognized for her artistic talent. He has cut her out of his life for over 18 years and now he has to come back to deal with her. What he finds out is that her caretaker is Sister Anne Frances (Vanessa Gamble) - who he used to have a romantic relationship with before she broke his heart, and possibly his faith. The play is a memory play so it changes time and location often, yet every change is very clear. The changes are smooth and clear with each actor making very clear and clean choices in how to show their younger selves. The direction by Kari Steinbach and Jeremy Stanbary was clear and concise. The set was a minimal set with three playing areas on three different levels. It has two desks and a few props but not much more. Sometimes a minimal space can be difficult in a memory play because the direction and acting has to make it clear that there is a change in time and location. In this production there was never any doubt where we were. The play perfectly shows the power of family and love, as well as the ways we are connected to one another. It spoke strongly of God's love but never in a preachy way. If you have a chance to see a production of this show, I would recommend it highly. 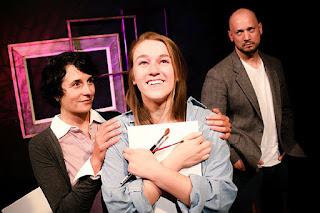 The production did bring up a question for me personally though. In the theatre world there is a lot of talk and action on race and ethnicity - making sure that characters of a specific race/ethnicity are being played by actors of the same. The question this show brought up is this. Can and should disabled characters be played by disabled actors? I think we are beginning to lean towards that, especially with the amazing press the Deaf West production of Spring Awakening is getting. I guess we'll see what happens in this city.

That being written, I was very taken by this production and this theatre. They had artwork in the lobby that was provided by Partnership Resources and I felt it fit the show perfectly. And looking at the season for Open Window - I know I will be back. The one thing the theatre could do better is with social media. There was an ad in the program asking the audience to share their experience via social media. However there was no information on what the twitter handle, hashtags, etc to use. Just a small issue in the big picture of how good this theatre is. I look forward to their production of "The Lion, The Witch, and the Wardrobe" coming up!