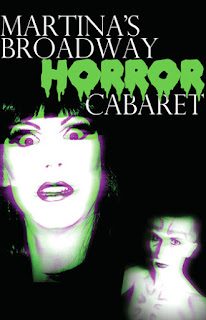 I may have mentioned in the last post that I love horror films. My other great love? Musical theater!

So I was all on board for Martina's Broadway Horror Cabaret. From the description at Twin Cities Horror Festival IV:


Come enjoy an evening of Broadway frights and Halloween sights as Martina (with the help of her Sister-Wife-Witches) join Bat Boys, vampires, zombies, and a cast of holiday icons to sing, dance, entertain and turn on their head a barrage of Broadway’s biggest hits and most horrifying flops. The evening promises to be a night of Fun, Fright and Fabulous!

The show absolutely lived up to its promise. With a cast of fifteen--including co-artistic directors Martino Gabriel-Mayotte as Martina Marraccino and Seth Gabriel-Mayotte as Bat Boy--and over twenty songs, this is a jam-packed hour-long show.

I don't want to spoil any of the surprises in case they reprise the show (and they SHOULD, every year), but a few of the ingenious musical numbers included:

-- "True Colors" (from Priscilla, Queen of the Desert) sung to Norman Bates (Jesse Frankson) as he dresses up as Mother

-- Everything done by Emily Grodzik, who has a fabulously expressive face and a strong voice, but particularly: "Kind of Woman" (from Pippin)

--Daniel Vinitsky was an amazingly committed zombie, who also knocked "Puttin' on the Ritz" from Young Frankenstein out of the park (along with Andrew Newman, Martina and Seth)

As a massive musical theater fan, it was delightfully refreshing to hear songs I wasn't familiar with, and also to hear the first strains of those I knew well.

Closing out the show was the only good song (IMHO) from The Addams Family: "Death is Just Around the Corner."

This song was appropriate and a little sad, as it the last show I caught at the Twin Cities Horror Festival. Sigh. Do I really have to wait another year for this fabulous festival to return?

Happily for me, I'll be able to see many of these fabulous performers and companies around town, which reminds me:

To find more about Martino and Seth Gabriel-Mayotte's upcoming work, check out Silver Slipper Productions, "created in 2006 by Seth and Martino Gabriel-Mayotte to create exciting Queer and Gender-Neutral theatre experiences!!" and their YouTube Channel with lots of videos of past performances.

You can catch their shows at Bryant-Lake Bowl and coming soon to Lush in Northeast Minneapolis, and you should. They are fabulous! And do we ever have enough fabulous in our lives?
Posted by Carly