Beautiful on Tour at the Orpheum: The Grinch Review 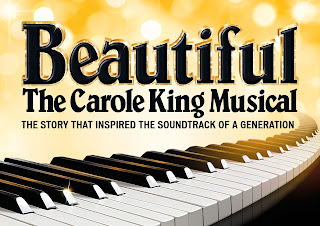 If you'd like to read a generous, even-handed, objective review of Beautiful: The Carole King Musical tour, now at the Orpheum Theatre, go read Jules's review.

Want to read a slightly bitter rant wherein I denigrate all that is good in the world and brings people joy? Here you go.

I realize that a whole lot of people worked hard to a) put this show together, b) get it to our fair city, and c) perform it with dedication and heart. I respect that and appreciate it. Also, I am a proud owner of (and singer-alonger-to) Tapestry. I think it's a beautiful album.

But to be totally honest: I don't think Beautiful: The Carole King Musical is a good show.

Let's start with the book, written by Douglas McGrath, who also wrote a vapid adaptation of Jane Austen's Emma starring Gwyneth Paltrow in which he rewrote Austen's dialogue to unsurprisingly ill effect. I found the book incredibly thin, with barely sketched out characters and relationships. The dialogue was simplistic and cliched, with little wit or insight. King's story is probably a fairly interesting one, but it's not depicted this way on stage.

Beautiful starts with King performing at Carnegie Hall. We go back in time and meet King as a precocious, grade-skipping, songwriting teenager selling her songs to Don Kirshner in New York. She meets Gerry Goffin and despite a lack of any chemistry or any onstage relationship-building, she gets knocked up, they get married and a songwriting team is born.

Despite some fun performances of their work by the artists who made them famous, things lag a bit. King is caring for their infant daughter, Goffin is working a day job (King was also working, but they left that out), and Goffin is getting tired of the domestic life and marital fidelity.

Enter Cynthia Weil and Barry Mann--a real-life songwriting team who are so entertaining, I assumed they were fictional. Comic second leads have a long history in musical theater (see Oklahoma!, Carousel, Showboat), but their presence in this show serves to show how not interesting King and Goffin are. I could feel the authorial hand in adding them to the show to perk things up.

And it does. But if the person that you are writing an entire musical about is not interesting enough to carry the show ... maybe the show doesn't need to be written. And yet, I think she IS interesting. She wrote over 400 songs performed by over 1,000 artists! That's amazing! (I found the number in my internet 'research', by the way. It's not in the show.)  Her body of work should be a strong, dramatic part of the plot, with an amazing a-ha moment where the audience realizes the powerful cultural impact of her work. In this show, that moment never happens.

So blah blah blah, Goffin cheats on her incessantly and is, in general, a complete jerk. It's hard not to think less of King for spending time (and money--she bought one of his mistresses a house--also not depicted in the show) with him. She really comes off as a doormat, and I think the fact that they wrote this with her blessing means that they had to whitewash things a bit. And because of the whitewashing, everything is a little more faded and less intense.

Plotwise, there's almost no there there. Basically, in the second act she moves to the suburbs, finally splits up with Goffin, writes her own songs, moves to California, writes Tapestry and performs at Carnegie Hall. Again, the cultural impact of this concert does not come across in the show. I felt no emotional arc in the narrative, despite the fact that we travel through musically vivid time periods, and her actual arc is one of female liberation and power.

On to performances. When you have a show where the book is weak, the actors need to work extra hard to overcome the book--to add interest and engagement where the book has failed them. Having seen snippets of her performance, I have no doubt that Jessie Mueller transcended the material to create King. I'm hoping that Scott J. Campbell as Gerry Goffin did as well.

I'm not a Broadway snob--I've seen at least two touring productions (Little Shop of Horrors starring Jonathan Rayson and Tari Kelly and the first national tour of The Book of Mormon starring Christopher O'Neill) in which I greatly preferred the performances of certain tour cast members to the original Broadway cast. But in this case, I did not feel that Abby Mueller and Liam Tobin transcended the material and the characters remained flat.

I will give a massive amount of love to Becky Gulsvig as Cynthia Weil, Ben Fankhauser as Barry Mann, and Curt Bouril as Don Kirshner. When Gulsvig came on stage to sell her songs to Kirshner, the show got a wonderful boost of energy. And the relationship between Weil and Mann (a marvelously dry and hilarious Fankhauser) had all of the energy and interest that the King/Goffin pairing was lacking.

I love seeing a racially diverse cast, and cheers to the ensemble, who were wonderful. I adored the men who played The Drifters (Josh A. Dawson, Paris Nix, Noah J. Ricketts, Dashaun Young) and their dazzlingly energetic and tight performances. I wished there was a musical about them! But why was the vastly white audience laughing during their performance? Was it the wigs? The mannered dance steps? I found that disturbing. Wonderful performances by The Shirelles--Ashley Blanchet (also an adorable Little Eva), Britney Coleman, Rebecca E. Covington, Salisha Thomas--as well. And John Michael Dias was charming as Neil Sedaka, popping in occasionally to sing "Oh, Carol!"

The costumes were beautiful, particularly the gorgeous dresses and suits on The Shirelles and The Drifters, and excellent period costumes for King, as she goes from frumpy teenager to semi-frumpy housewife to self-actualized California free spirit. The wigs were amazing and they must have hundreds backstage.

The set?  Not so much for me. I found it aggressively ugly and unimaginative. The backdrop for 1650 Broadway, where much of the songwriting time is spent, is brown and consists of vaguely patterned recording equipment. And even the straight-up performance numbers are marred by curtains of light with unfortunate color choices. See below.


I never considered myself to be a jukebox musical snob. But I have strictly avoided Jersey Boys, and any show where the audience might be tempted to sing along. I don't go to musical theater to hear the hits of my youth--although I would have totally gone to see Our House: The Madness Musical. This kind of musical makes me long for something more. Say what you will about Mamma Mia!, at least they ingeniously worked the songs into the narrative. In this show, they are simply plopped in with little rhyme or reason. The audience doesn't marvel at the connection these songs have to the narrative, but is excited just to hear the songs they know. I have a dark, curmudgeonly soul, but I find it unsettling. Jules put it beautifully here.

This show made me long for new musicals, for shows with complicated characters and relationships, with unexpected twists and turns, with songs I may like or I may not, with a narrative enhanced by song, not one that exists purely to hang songs upon.

There you are. Rant over. Grinch review completed. If you loved the show, excellent. We are all different and that is what makes us special. And I'm not just saying that.