Letter from Chicago - Gotta Dance at Bank of America Theatre 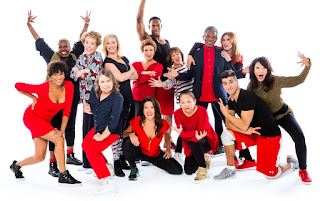 We recently caught Gotta Dance at the end of its limited run, and I'm so glad we did.

I mean, how can you pass up an opportunity to see a pre-Broadway world premiere of a new musical? Especially one that is directed and choreographed by Jerry Mitchell (Kinky Boots), with a book co-written by Bob Martin (The Drowsy Chaperone) and starring Lillias White, Andre de Shields, Georgia Engel, Stefanie Power, and Nancy Ticotin. And did I mention Lillias White? You just can't pass that by.

Gotta Dance is inspired by the story of the New Jersey NETSational senior hip hop dance team portrayed in the 2008 documentary of the same name. The show starts at auditions for a senior dance team, and it isn't till our intrepid cast make it through auditions that they realize it's a hip hop dance team. Alison (Tracy Jai Edwards), kicked off her own team for being too old (28, I think), is tasked with whipping these dancers into shape. Cue drama: Do they really have what it takes? (Spoiler: Take a guess.)

I see a lot of theater, and I have seldom seen a show where the audience is so obviously and completely on board. They are all-in from the beginning right through the ending--laughing, sympathizing, cheering on the characters. It was an amazing audience experience, and one I'll remember for a long time. And I was right there with them.

A few things I really loved:

The Characters:
It's a dance team, so there are a lot of characters. Having just seen a lot of indistinguishable characters onstage in Bel Canto, I was a little worried. But Bob Martin and co-book writer Chad Beguelin have created realistic, fully fleshed-out characters with strong and relatable stories. I also love how racially, culturally, age and gender-diverse the cast is.

The Cast:
Come ON. Lillias White? Hearing  Lillias White sing in person is basically on my theater bucket list. And Andre De Shields was so magnetic and mesmerizing. Georgia Engel appears to have a painting in her closet, and her comic timing is exquisite. Every member of the cast was fabulous.

The Songs:
I tend to judge new musicals by whether I'll remember any of the songs when I've left the theater, or if I'd want to listen to the cast recording months later. The songs in Gotta Dance (music by Matthew Sklar and lyrics by Nell Benjamin) easily passes those tests. I particularly loved how specific to each character the songs were, and how much they developed already full characterizations. And don't forget the excellent beats and the rousing group numbers.

This is a funny, touching, sweet and fun show. I'm hoping for a strong and healthy run on Broadway (opening in Fall 2016) and beyond.
Posted by Carly