Letter from Chicago - The Heir Apparent at Chicago Shakespeare Theater 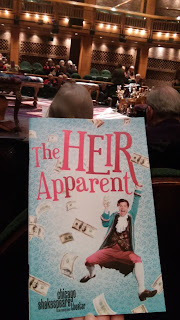 We knew only a few things about Heir Apparent at Chicago Shakespeare Theater before going in:

Technically, David Ives adapted the play from the French Restoration play Le Légataire universel by Jean-François Regnard. Never heard of it? Us neither.

Described on Chicago Shakespeare's website as a "cheeky romp" and directed by John Rando, Heir Apparent is about young (and handsome) Eraste (Nate Burger) who must be named as the sole heir by his miserly uncle (Paxton Whitehead) before he can marry the beautiful Isabelle (Emily Peterson). He's aided in his endeavors by his servants Lisette (Jessie Fisher) and Crispin (Cliff Saunders), and occasionally thwarted by Madame Argante, Isabelle's mother (Linda Kimbrough) and diminutive lawyer Scruple (Patrick Kerr).

Essentially, hilarity ensues, and ensues and ensues, to the point that the woman next to me snorted (in a hilariously unladylike fashion) while laughing and the woman next to my sister said to her at intermission, "You're really enjoying this, aren't you?" And we did. To a person, the cast was spot on and totally committed, despite our catching one of the last performances of a long run. I am putting every single one of them on my don't-miss theater list.

Sidebar: One of the funniest audience interactions I've ever seen happened during this show. At one point, in all of the madcappery, Crispin stops and checks in with the audience to see if they're following the plot. He happened to pick out a couple in the front row--just two rows in front of us--to direct his comments to. The hilarious part is that she was reading her program, I mean, READING her program to the point that she didn't notice him talking directly to her, just a few feet from her. And to add to that, he looks past her and notices that her husband is actually asleep. You could see his glee at that discovery, and the whole interaction was hilarious. (Eventually, someone poked her.)

Great talk-back after the show as well with the cast. I love Chicago Shakespeare. It's one of those theaters that makes me sigh that it's not located in my town. Can I at least move to Chicago for Shakespeare 400, a yearlong, citywide celebration of Shakespeare's work?

Oh, and did I mention their awesome bar? It's like a miniature pub, and it's the only theater I know that serves Champagne in real glass flutes. It's a classy joint, that Chicago Shakes. (Reviewed by Carly)
Posted by Jules