Catch Me If You Can - Chameleon Theatre Circle 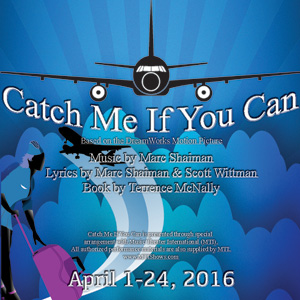 Catch Me If You Can is about the adventures of Frank Abagnale Jr. (Austin Stole), whose exploits were recounted in the book and film of the same name. We start in media res, with Carl Hanratty (John Goodrich), the FBI agent who chased Abagnale (Austin Stole) for years finally catching him. Abagnale asks to tell his story, and the show begins.

We follow Frank through his life, with parents who don't get along and a con man for a father, he quickly learns that it's easier to "Slip Into Someone Else's Skin," a great number that perfectly encapsulates his decision to impersonate a teacher, a pilot and a doctor.

Oh, and he forges checks. Lots of them. This activity is what brings him to Carl Hanratty's notice at the FBI. He becomes obsessed with tracking down the mysterious forger, and chases him across the country.

Catch Me If You Can is a great play, with a book by Terrence McNally, music by Marc Shaiman, and music and lyrics by Shaiman and Scott Wittman. The musical numbers are gorgeous, tuneful and perfectly tell this story. They also provide an opportunity for some truly great musical theater singing, not just from the leads but by the full chorus.

The best two elements of the Chameleon Theatre Circle's production are in the casting of its two leads: Austin Stole as Abagnale and John Goodrich as Hanratty.

John Goodrich had giant shoes to fill in my mind, as Norbert Leo Butz played the role in New York, and won a Tony for it. But Goodrich did an outstanding job, and made the part his own. He looked perfectly at home in his rumpled trenchcoat, Buddy Holly/George Smiley glasses and hats. He put over his numbers beautifully, even the challengingly wordy (while dancing!) "Don’t Break the Rules." He completely embodied Hanratty's complex character—dedicated and driven, but with a dry wit, and hit the humor in the songs perfectly.

As his nemesis, Austin Stole as Frank Abagnale Jr. is also very good. He has a wonderful voice and handles the songs with ease. He is handsome, youthful and charming, as Abagnale should be, and he has a confidence and an ease that is necessary for this role. He does look and sound unnervingly like Aaron Tveit, but perhaps that's just the Abagnale type.

The production itself sounds wonderful, with musical direction by Dale Miller. The band sounds great, the chorus numbers are terrific, and as mentioned, the two leads do a great job.

The show takes place in The Ames Center's black box theater, with five rows of chairs on risers facing the performance area. I sat in the back row, and wished I could have sat farther back. Sometimes, you need a little distance with your theater. I love a chorus, but to ask them to do chorusy enthusiasm when they are mere feet from the audience is pretty hard on everyone.

The set consisted of a platform, and two sets of stairs leading up to it. Between the stairs was a long black lighting element, and on either side of the stairs were tall, blank walls upon which were projected an image that looked a bit like eyeballs. I still don't know what it is. The set piece was painted a pale yellow, and occasionally orange lights were projected on the stairs. The majority of the action takes place on the floor, and there was a fair amount that I could not see. Basically anything that wasn't back against the set piece was hit or miss. It was disappointing, and I hate to see audience members craning their necks. Why not use some of the space and the set piece? Why not make more use of the platform?

There were a few issues with microphones (I know things have to be miked, but does it have to be so obvious?), and lighting. The men's costumes were generally fine, but the women's costumes tended towards the unfortunate, especially the nurses who were wearing very short outfits with just underwear underneath. (If it wasn't underwear, it sure looked like it. We saw it again in the Mitch Miller number, with pinafores that open in the back with nothing under them.) But it is community theater, and they had a large cast to costume. That said, with such a large cast, is it necessary to make primary cast members move furniture off the stage?

Anyway, John Goodrich and Austin Stole do a terrific job in this production, and I still love the show. Glad to see what a smaller theater can do with the show—it gave me lots of food for thought.

Now for the user experience part of this review. The show was general admission, but many of the seats were reserved for Chameleon Theatre Circle members. This is not particularly welcoming to the average person who is new to Chameleon. Not only that, but the show was sold out, and there was only one center aisle in their seating configuration.

Everyone knows that Minnesotans have to be urged to sit next to each other. Why not have the ushers let people know that the show is sold out and ask them to please use every seat? Or have someone in the house directing people to move down as they sit? Instead, the house manager (I'm guessing she was a house manager, she had no name tag), came in and demanded that people move down, leaving the aisle and center seats for latecomers. I balked on behalf of the lovely older couple sitting next to me, who got there early and chose their seats for the man's comfort (and long legs). In addition, the banquet style chairs were right next to each other and we were packed in like sardines. A smoother seating experience would have made it easier to relax and enjoy the show.


Seeing this show made me remember Norbert Leo Butz's Tony win for this role. In his acceptance speech, he was unable to thank a few people. He made it right in this heartwarming, charming post-Tonys curtain speech: