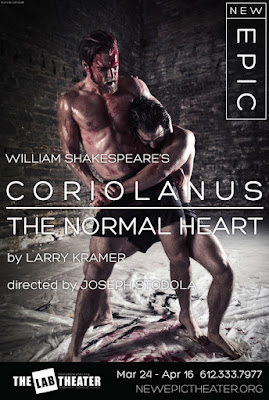 I love being right. When I first heard that New Epic Theater was performing The Normal Heart and Coriolanus in repertory this spring, with a cast that includes Michelle O'Neill, Zach Curtis, Torsten Johnson, and Grant Sorenson, I was sold.

Now, after seeing Coriolanus, and putting it together with our viewing of The Normal Heart, I find the promise inherent in this ambitious combination of plays, director (Joseph Stodola), and actors pays off beautifully. And I mean, beautifully.

Coriolanus is a less-known Shakespeare play.  [Jules sidebar: Honestly, for the longest time, I only knew it was Shakespeare because it's a line in the song "Brush Up Your Shakespeare" from the Cole Porter musical Kiss Me Kate.]

However, it's had a bit of a resurgence in recent years; Ralph Fiennes directed and starred in a 2011 film adaptation, and Tom Hiddleston played the role in 2014 at London's Donmar Warehouse, an extremely bloody production that was broadcast in America as part of National Theatre Live.

Want to know more about the story in Coriolanus? Check out Shmoop's In a Nutshell guide to the play. tl;dr (too long, didn't read)?


Set in the early Roman Republic, it's all about the rise and fall of a big time war hero who kicks serious butt on the battlefield and then fails miserably when he returns home and runs for political office.

The focus, again, is on the characters and the action. No time is wasted getting the battle started. Roman general Caius Martius (Torsten Johnson) leads the troops into battle against the Volscians, led by his old rival Aufidius (Michael Wieser). The battle is waged in a bloody, sweaty, athletic sequence that becomes a pas de deux for Coriolanus and Aufidius, executed shirtless by actors who clearly know their way around a gym. (See photos. Really, see these photos. Don't you love Shakespeare?)

Having defeated the Volscians and captured the city of Corioles, Martius is granted the name Coriolanus. Upon his return to Rome, Coriolanus is greeted with great pride by his mother, Volumnia (Michelle O'Neill), and is persuaded by patrician Menenius (Zach Curtis) to stand for election as consul.

Unfortunately, Coriolanus is a pompous ass who thinks way too highly of himself and refuses to tone down his opinions to placate the people whose votes he needs. Menenius manages to smooth things over, and Coriolanus is elected, only to be brought down by two tribunes (Grant Sorensen and Adam Qualls) who don't think his heroism is enough to make up for his bad attitude to the poor. They have him banished from Rome, which makes Coriolanus angry. He joins forces with his frenemy Aufidius against Rome, which ultimately leads to his downfall.

New Epic Theater's production plays up the parallels between Shakespeare's tragedy and modern life. But even while illuminating universal themes, the play doesn't lean into caricature. As stubborn as Coriolanus is about expressing himself, Johnson still shows his character's doubts and makes Shakespeare's words meaningful.

The codependent relationship between the soldier and his mother veers into excessive closeness, but Johnson and O'Neill play their characters so intensely that the extremes of their interactions are a natural extension. Michelle O'Neill is hands down my favorite performer of Shakespeare in the Twin Cities, bringing nuance and texture to Volumnia.

Similarly, it's not surprising when Johnson and Wieser's passionate rivalry dances over the line between love and hate. Curtis is another standout, playing the consummate politician who pleads for compassion in a physically wrenching moment that is painful to watch in the best way. These performances are ably supported by the rest of the eight-member cast playing soldiers, senators, and citizens, always clearly delineated by costume or carriage.

This production is stunning. Seeing a lot of theater, it can be easy for plays to run together in my mind, or to slip away unnoticed. But director Stodola's arresting stage pictures have been running through my mind, both from The Normal Heart and from Coriolanus.

The minimalist set for both shows uses rows of old-style metal desks and a rear platform. The costumes are very similar if not the same: modern and neutral, with shoes—or the lack thereof—holding meaning. Even Dr. Brookner's wheelchair and a hospital gown from the earlier play reappear. The Lab has become a favorite place to see theater, but I'm not sure I've ever felt the scarred, brick walls and scarce offstage space have ever been utilized as successfully as in these two shows. Lucid Thomas's dramatic lighting is almost cinematic in focus, and the sounds created by the cast stomping and thumping on the desks set a martial tone.

And it must be said that the actors are the most impressive visual effects. Johnson ably embodies what one of the soldiers says of Coriolanus, "He is their god: he leads them like a thing / Made by some other deity than nature / That shapes man better." And Wieser matches him in physicality and strength, as displayed and emphasized by the expressive movement staged by James Kunz.

The final image in Coriolanus is well worth the price of admission. It's literally breathtaking. When the lights came back on, there was a visceral exhalation of breath from the audience. (And not just the lady behind me who audibly gasped when Coriolanus took his pants off. Come on, lady. Pull yourself together. This is SHAKESPEARE!)

These two plays offer almost an excess of food for thought, with ideas and situations echoing each other as well as current events. The mirror-image relationship of Coriolanus and Aufidius to The Normal Heart's Ned Weeks and Bruce Niles is almost eerie, as are the characters' parallel relationships to Curtis and O'Neill's characters in each play.

Fortunately, New Epic provides a starting point for more study. Excellent background essays by Erica Meium on Coriolanus and The Normal Heart provide concise and valuable context for the plays. And they helpfully reprint the letter that playwright Larry Kramer handed out at the 2011 Broadway revival of his play.

Take advantage of this opportunity to see these two shows in brilliantly conceived and executed repertory. It's not every day that theater like this comes along. New Epic Theater has firmly landed on my can't-miss local theater list.