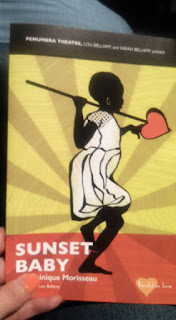 Sunset Baby, is the last play in Penumbra Theatre's 2015-16 Revolution Love season. The play, by rising star Dominique Morisseau, is playing through Sunday, May 8.

Before we get to the play, can I just tell you what I love about Penumbra Theatre? I love that they've devoted their whole season to shows about social justice. I love the comprehensive "Dig Deep" resources and readings, and their thoughtful post-play discussions. I love their innovative Bookends, Let's Talk and Reel Talk programs, which provide even more of an opportunity for engagement. I even love their tee shirts. I wanted to love Sunset Baby as well.


Dominique Morisseau is currently working on a three-play cycle about her hometown. The first of these is Detroit '67, which Penumbra produced last year in a marvelous production directed by Shirley Jo Finney, and starring Austene Van, James T. Alfred, Darius Dotch, Jamecia Bennett and Elizabeth Efteland. Detroit '67 was a moving and musical play about people trying to live their lives in the midst of intense racial tensions that led to one of the deadliest and most destructive riots in history. The play evoked the anxiety of the time, as well as the very real and funny personal relationships of a fascinating group of characters.

Sunset Baby is not part of Morisseau's "The Detroit Projects," and the play is quite different in feel. Detroit '67 was music, dancing and affection in the face of incredibly tense times, and Morisseau's language practically danced across the stage. Sunset Baby is set in contemporary times, and the harsh, profane language never flows, but is fairly spit out by each of the characters.

Nina (Jasmine Hughes) is a hustler who works with her boyfriend Damon (Ronnel Taylor), a drug dealer. It's a harsh life and Nina is a tough customer, which is at least partly due to the absence of her father in her life. Kenyatta Shakur (James W. Craven) was an important figure in the black liberation movement, and ended up in prison for following his ideals. As the play begins, Nina's mother Ashanti X, famous in the movement as well, has died, leaving Nina some letters that she wrote to Kenyatta but never mailed. He wants the letters, but since the news has spread of previously unreleased letters between these two historic figures, Nina has been offered a lot of money to sell them, which could help her to leave her grim life.

What I find fascinating about this play in contrast to Detroit '67 is that I never felt a connection to these characters. They're not easy characters to be sure--there's no dancing in the basement to Motown tunes (as in Detroit '67). Which makes me really think about my own response to this show. Why is it that I found these characters so distancing? Is it really that they didn't exhibit much growth or relationship progression? Is it that the contemporary story of drug dealers and hustlers needs the burnish of years and charming period music and costumes to provide entrée? Or, finally, that I just don't know enough about the black liberation movement?

I keep thinking about Ta-Nehisi Coates's Between the World and Me, and what he wrote about Black History Month:


Every February my classmates and I were herded into assemblies for a ritual review of the Civil Rights Movement. Our teachers urged us toward the example of freedom marchers, Freedom Riders, and Freedom Summers, and it seemed that the month could not pass without a series of films dedicated to the glories of being beaten on camera....Why were only our heroes nonviolent?

And he asks, why do we never see the militants? I love that Dominique Morisseau is addressing the harsher realities, and that her main character is the product of two revolutionary activists. I wanted to know more about Nina's parents, though. Although several scenes have Craven talking to himself (or recording himself?) in a corner of the stage discussing his life, it was hard to understand what he said there (and hard to see from where we were sitting.) I really wanted to know more about Nina's mother, and what she brought to her relationships and the movement. The play felt like it needed a little softness. Although Ronnel Taylor as Damon was the most vulnerable character, he still had a touch of menace. All three actors were solid. James Craven looks and sounds the part of a former revolutionary, Ronnel Taylor brings elements of humor to his performance, and Jasmine Hughes did her best with a pretty unsympathetic character. I look forward to seeing more from Hughes, an engaging actor who was so marvelous in Pillsbury House Theater's Bright-Half Life earlier this year.

However, even at about 100 minutes, the play felt too long and repetitive. I found the dialogue difficult to follow, and even to understand. I clearly may have missed something profound that would have clued me in to the meaning of the play. Unfortunately, I'm still in the dark. It's rare for me to be disappointed by Penumbra, but both figuratively and literally, this play just didn't speak to me. I still appreciate Penumbra's work and mission, and the food for thought that the play has given me.
Posted by Jules