nobody, not even the rain, has such small hands - e.e.cummings 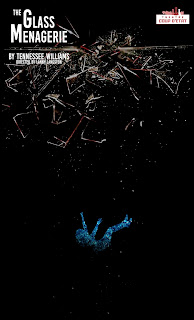 The printed version of The Glass Menagerie has this line at the front. After reading the full poem, it makes a bit more sense that it is attached to a "memory play." Memory is a tricky thing. As Lanny Langston writes in his director's notes "...It gives us the ability to look back on our lives and not only remember what has past, but relive it. We can find great comfort...more common, however, is the tendency to use memory as a weapon against ourselves." I feel that Tom Wingfield uses this play, this memory to beat himself up over what might have been, what changes could have been made in his relationship with his domineering yet loving mother, his dear sister, and how that may have affected his own life. It is a wonderful script (with which I have a few questions/problems for Mr. Tennessee Williams), and the production of The Glass Menagerie by Theatre Coup d'Etat is just as wonderful.

The production is being performed at SPACE, a location run by savage umbrella and located in the Vandalia Tower. It is on the third floor, possibly handicap accessible via a freight elevator, in a space that has been turned into a theater. We attended opening night which, while perfectly nice outdoors, the space was very warm. Luckily the heat fit into the script perfectly as the play is set in St. Louis, and much is said about the heat. Being a memory play, the set can be as fantastic as the recent Broadway revival, or it can be as realistic as wanted, or a combination of both. This production had a very realistic main set, with an abstract doorway/fire escape.

The show is perfectly cast, and very well directed. Cynthia Uhrich as Amanda (the mother) is so clear with the love that she has for her children. It is so evident that what she does, and what she says is all in hopes of making her children have better lives, to be better people. Sometimes this role leans too much on the character description of "...woman of great but confused vitality clinging frantically to another time and place." There are some productions where it seems as if Amanda were on her way to the loony bin. Not so here. Uhrich provides Amanda with a restlessness that is evident in the pacing, the near constant chatter, as well as the way she interacts with the Gentleman Caller...somewhat flirtatious, somewhat performance, but all heart.

Speaking of the Gentleman Caller - showing up in Act Two, being a "nice, ordinary, young man", and yet being a catalyst for change, desperation, loss, etc - well, that is a large burden to bear. Kevin Fanshaw (a 2016 Twin Cities Theater Bloggers Awards nominee for Best Actor in a play) plays the role perfectly. Hesitant, a bit shy yet clearly working on getting over his shyness, approaching Amanda and Laura with an openness that is polite, gentle, and yet very sweet. A great performance.

Kaylyn Forkey as Laura, and James Napoleon Stone as Tom were fantastic. Their desires, fears, and even frustrations are so very clear. The moment where Amanda forces Laura to open the door to the Gentleman Caller was near heartbreaking with the amount of fear, and emotion both actresses put into it. Wow. Forkey showed that Laura is aware of how her shyness affects her social life, and her family, yet is also clear to show Laura trying to fight that shyness, trying to be better. It was a fascinating struggle to watch. Stone was also very clear in every motivation, even when he knew it may be hurtful to the family he had to follow through with what he needed to do. Stone is put through the emotional ringer in this part and not a single moment rings false. I even hoped the lights would stay down a bit longer before curtain call to give him time to compose himself - and that is a beautiful thing to be able to say. Stone also plays the restlessness that is evident in Amanda which is also evident in Tom - perhaps not as much physically but it is so clear that Tom needs to escape from that house.

Speaking of the house - I had two very small quibbles about the use of the set and space. I mention them only because I think they will both make the performance even stronger (if that is possible). To start, the set was wonderful. The main room was covered in rugs, a few tables, chairs, and a sofa. Against the wall was the glass menagerie which also included many mobiles, and glass bits hanging from the ceiling. It was beautiful in a slightly disheveled way. The one exit had a few steps up to a landing, then a few steps down front off the landing. There was no door frame, nor door. First off, when using an imaginary door - it needs to be real to the characters on stage. The imaginary door had no weight, or size to it which most people may not have noticed but it could be a distraction to some. There has to be consistency in how it is being used. The other very small issue was regarding the light from the hallway. It seems that there is no backstage entrance/exit which means the cast has to come in through the front of the house. When the lights go down, it felt odd to sit in the dark, then have the door open, light stream in from the hallway as the actors walked past the audience to their places. I think that the cast entering in while house lights are at half would prevent this and not break the focus of the audience. At the top of the show, I thought it was late audience members coming in...not the cast.

Luckily, the production and performance was strong enough to overcome the two small issues I had. It is a great cast that is well directed and is performing at such an amazing level. Four actors keeping my attention and making this classic feel alive - they are truly succeeding in their mission which is to "...provoke an emotional and analytical response in our audiences by showing the depth of the human condition..." It is a show and a performance NOT to be missed. It plays through June 6.

Now, Mr Williams...about your script... And who do we ask to find out about the lovely music used through out?
Posted by KRL