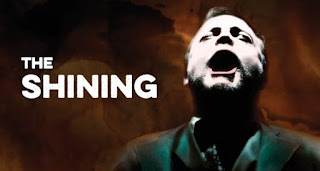 Few things seem more unlikely than an opera based on a Stephen King novel. High culture meets bestselling horror fiction? Worlds converging? And yet, it's true. And it's practically perfect.

The Shining is a world premiere commissioned by Minnesota Opera as part of its New Works Initiative. Composer Paul Moravec is a newcomer to Minnesota Opera, while librettist Mark Campbell’s previous works include the world premieres of Silent Night and The Manchurian Candidate (both also commissioned by the Opera). The collaborators went back to Stephen King’s original 1977 novel, and not the well-known Stanley Kubrick film, which King was never happy with.
If you have somehow missed the book, the Kubrick film, or King's 1997 miniseries, The Shining is a novel about Jack Torrance, who gets a job as caretaker for the Overlook Hotel in Colorado over one winter. He brings his wife Wendy and their son, Danny, and plans to work on a play he is writing. He's hoping the isolated hotel will help him with his work, and to make a fresh start with his family, after his alcoholism and temper have cost him a teaching job. But the Overlook has other plans for Jack.

The line between musical theater and opera can be a little close, and some work is better suited to another genre. But The Shining is absolutely perfect as an opera. The music and libretto, natural and realistic in the beginning of the opera, perfectly encapsulates the increasing tension and heightened emotion of the story. The fantastic stage and production designs supports the music and cast at every point.

Minnesota Opera has put a ton of resources into this production, and it all shows on stage. Masterful projection design sets the scene, showing us the vast uninhabited expanses that surround the hotel, helping us to feel the isolation that soon envelops the Torrance family.

Layers of animation and projection combine with practical sets to blur the lines between the realism of the opening and the encroaching sinister forces as the hotel and its madness become all too real. 59 Productions, who designed the animations and projections, recently won a Tony for An American in Paris, and has contributed to a number of Broadway and Metropolitan Opera productions.

The cast was perfect. As the increasingly tortured Jack, Brian Mulligan used his beautiful baritone voice in ways both lovely and ugly, devolving at times into speaking and shouting, conveying the character’s state of mind. Minnesota Opera favorite Kelly Kaduce as Wendy was glorious as always, showing the intense love and commitment of her character as well as her growing fear.

As Danny, young Alejandro Vega was very good in the difficult role of this gifted child who experiences much more than the adults around him. His energy and focus were impressive, and made Danny feel like an actual child in spite of his gifts, which included channeling the voices of the hotel’s ghosts, with the chorus chiming in eerily.

Aside from the Torrance family, the strongest (human) presence in the opera comes from Arthur Woodley as Dick Hallorann, cook at the Overlook. Hallorann is heading to Florida, but he recognizes that Danny has the shining (visions, or precognition) as does Hallorann. Woodley has a great deep voice with incredible ringing high notes. He was so in tune and in touch with the character’s protectiveness of Danny. He was a joy to hear and to watch on stage.

Also of note is a male quartet comprised of Mark Walters, Alex Ritchie, John Robert Lindsey, and David Walton, who sang at a pivotal point in the second act. They were truly sinister and sounded so good together, especially when Brian Mulligan joined them in song. The chorus, and other featured singers were all fantastic.

In addition to the fantastic singing, the performers acted the play beautifully. The connections of the family felt very real, which made it all the more disturbing when things really start to go wrong. The violence necessary to the story was more realistic than most drama seen on opera stages.

Every bit as important as characters are the ghosts of the Overlook Hotel, and the hotel itself. Skillfully contrasted with the realistic, everyday relationships and activities of the Torrance family are the ghosts. They are first seen only as silhouettes, but as Jack’s mania grows, so do the depictions of the hotel’s creepy previous inhabitants, until Jack is moving freely among them.

Modern opera can be a challenge: how can a modern composer create something on par with operas that have existed and been loved for hundreds of years? The Shining is a truly modern opera that features some lovely melodies, but is also truly unsettling. The music creates a tense musical atmosphere that was never overbearing but also never let up. Occasionally tough and sometimes discordant, the music is wonderfully performed to provide the creepy atmosphere that kept the tension mounting.


The costumes, by costume designer Karin Kopischke, add to the stark contrast between the reality of the Torrance family and the surreality of the Overlook's other residents. Each costume is beautifully appropriate to each character, from the everyday 1970s wear of the Torrances to the uniforms of the previous caretakers and staff to the outlandish and unsettling costumes of the masked partygoers.

Honestly, the whole production was superb. Every element worked together perfectly to create a truly sinister and unsettling atmosphere while telling a great story of love and sacrifice that remains true to Stephen King's wonderful book. The Shining is a perfect evening at the opera. Hurrah to Minnesota Opera for commissioning this work; I hope this marvelous addition to the canon has a long, successful life.

(co-written by KRL, Jules and Carly)
Posted by KRL