One of the things I love most about these Twin Cities is having so many options when it comes to theater. Yes, we have all of the great community theater, along with theater companies, comedy troupes, puppets, children's theater, touring shows....and then the ones that few people know about. The Playwrights Center (which hosts new work, works in progress, etc), and Second Fiddle Productions.

Second Fiddle Productions, according to the message from Ruthie Baker (Artistic Director & Founder), was created to breathe life into uncommon and rarely produced musicals. It also strives to give artists a chance to collaborate with fellow artists, go after dream roles and have input on show selection (adapted from the back of the program.) These productions are done at Camp Bar in downtown St. Paul. There is a stage, chairs, music stands, microphones and a small band - which is really all you need for a staged reading. Drinks are available through out the show, and the space is intimate and perfect.

The latest reading they had was of the 1984 pop-musical Chess. From the notes written by the dramaturg Gina (from The Room Where It Happens), the show was first conceived by Tim Rice in 1979. He wanted to do a musical about the Cuban Missile Crisis and approached Andrew Lloyd Webber. Webber was working on Cats and suggested Benny Andersson and Björn Ulvaeus of ABBA fame. They started working on it in 1983 and released a concept album in 1984. That was when the world first heard (and made a hit out of) "One Night in Bangkok" as well as a few other songs. In 1985 Michael Bennett started working on a production in London. Due to his failing health it was taken over by Trevor Nunn and opened in 1986. I had the great pleasure of seeing it on Jan 24th, 1989. Looking back there were clearly moments of Bennett genius that stuck with the show, and in my memory - it was a great show! I also had the pleasure of seeing and hearing Anthony Head (Giles from Buffy, the Vampire Slayer) sing the role of Freddy Trumper, the American. Of course, I didn't know him at the time but it was a great voice! 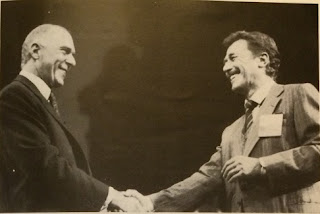 After the Cold War ended, but while the London production was still playing, Trevor Nunn decided to revise the show for Broadway. They added some new music, some backstory and sent it out into the world...which did not care for it at all. However it did have some great performers - Judy Kuhn, David Carroll, Richard Muenz, and Jessica Molaskey were all involved. This production was revised again before it was sent on tour in 1990. I also saw this production and while I enjoyed the music, it was not a good production...despite great performers like Carolee Carmello, Gregory Jbara, and Barbara Walsh. 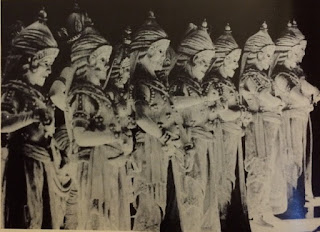 Since then it has been reworked a bit more. While it may not be known well in the US, they still love it in Europe. There was a 1994 Concert recording, there was a Danish tour in 2001, a Swedish production (which I believe is also available on DVD and is quite good) in 2002, then the revised performance here in the States. It was a one-night Actors Fund benefit concert performance that eventually in 2008 became the concert version from the Royal Albert Hall - with Josh Groban, Adam Pascal, and Idina Menzel. Since then it has had another tour in Denmark, as well as Hungary. 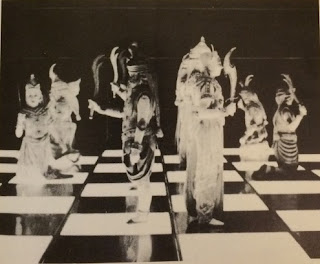 The cast from the Second Fiddle reading included so much amazing local talent - Ruthie Baker sang the role of Florence, while Ben Bakken killed it in the role of Freddie Trumper (what an amazing voice). Singing across from Ben was John Brink (as Anatoly) and Zoe Pappas as his wife (both previously seen at the Ordway in the Kander & Ebb Songbook). Jim Ramlet sang Molokov with a very lovely bass voice that just rang through the room. The remainder of the cast was top-notch and very comfortable with a very wordy and difficult score. It is even more proof that Second Fiddle knows exactly what it is doing and how to do it so well - even with a very limited rehearsal period. It was a joy hearing this wonderful music again, and the performances were just incredible. I will continue to attend their shows and support them in any way I can. By the way, if you still want more info about Chess, this may be the book for you.