Paint Your Wagon at the Ordway 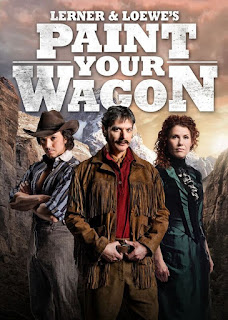 For a perfectly delightful summer night at the theater, go see Paint Your Wagon, the new Lerner and Loewe musical that opened Thursday night at the Ordway (playing through August 21).

Wait, what? Paint Your Wagon is a new musical? But wasn't it a movie where Lee Marvin and Clint Eastwood sang? And a hilarious musical joke on The Simpsons? Yes to all of the above.

Paint Your Wagon was the 1951 Broadway follow-up for Alan Jay Lerner (book and lyrics) and Frederick Loewe (music), whose Brigadoon was a hit four years earlier. The show had book trouble from the start, and when it was made into the 1969 film, the story was thrown out and a new plot accompanied the songs, which were always the strength of the show.

The show has never been revived on Broadway, and doesn't get a lot of productions, due in part to the lack of a compelling storyline. The Ordway has partnered with Seattle's Fifth Avenue Theatre to commission a new book by Jon Marans, the Pulitzer-nominated author of Old Wicked Songs. The production was first performed at Fifth Avenue and now comes to the Ordway as the first show in the 2016-2017 season.

Despite being a huge fan of musical theater, I didn't know much about the previous iterations. What's wonderfully refreshing about the new book is that it populates the Gold Rush setting with a cast of characters seldom seen in a classic musical. The racial and cultural diversity here isn't window dressing, but is central to the story in a new and refreshing way.

In 1849, gold is discovered in California, and settlers converge on a desolate place that they call No Name City. The travelers include Jake Rutland, a businessman accompanied by his slave, Wesley. When they cross paths with free black man H. Ford, Wesley starts to see a different future for himself. William has come from Ireland to make his fortune and return to his wife back home. As more men come to No Name City, Jake opens a saloon. Even on the frontier, where cooperation means survival, Jake segregates his clientele, who also include prospectors from China. But it's clear that not everyone agrees with his strictures, and much of the push and pull of the story involves these disparate people learning to live together and accept each other - or not.

Of course, it's a musical, so there is also romance. Grizzled trapper Ben Rumson comes to the aid of Armando, whose Mexican family and their land were lost to the influx of white settlers. They arrive at the same time as a Mormon swindler with his two wives, one of whom is purchased by Ben to keep her out of Jake's hands. The town is livened up later by the arrival of some showgirls and Ben's daughter. As time passes, the town's fortunes rise and fall, some people learn to get along, others allow fear to turn to hatred, and everyone has to deal with the vagaries of the gold supply and the weather.

It's a compelling chronicle of a fascinating time, but of course is held together by the music. "They Call the Wind Maria" and "Wand'rin' Star" are the most familiar tunes, but all of the songs, newly arranged for this production by Ian Eisendrath, are effective and catchy expressions of the time and place.

Lerner and Loewe had a gift for writing to their setting, whether the Scottish Highlands in Brigadoon or the court of King Arthur in Camelot, and once again, the songs here are particularly appropriate to the tine and place as well as the characters. The energetic "I'm On My Way" and "Whoop-Ti-Ay!" show off the talented ensemble, while "Wand'rin' Star" and "Cariño Mio" are examples of songs that fit the characters perfectly. The fourteen-piece orchestra provides beautiful accompaniment for the gorgeous singing. A simple set perfectly sets off the wild, energetic choreography.This show has some serious fluid and powerful movement. And not a moving staircase to be found!

Robert Cuccioli, whose many Broadway credits include originating the title role(s) in Jekyll and Hyde, has a wonderful larger-than-life presence as Ben. From his introduction as a bushy-bearded, beaver-trapping loner to the complex married man trying to find a way to live his life, you cannot take your eyes off of him. His rich and robust voice utterly soars in "They Call the Wind Maria" and "Wand'rin' Star," two of the best-known songs in the show. I was pleasantly reminded of John Raitt.


As Armando, Justin Gregory Lopez has a crystalline tenor voice and endearing comic timing. He creates a wonderfully layered character, and his relationships with Ben and Ben's daughter Jennifer are complex and moving. As a bonus, his voice blends beautifully in duets with Kirsten deLohr Helland's Jennifer.

A few standouts: Rhett George plays free man of color (and barber) H. Ford, and with his rich voice, comic timing, and strong character, was the heart and soul of the show. Jared Michael Brown plays the (mostly) villainous Jake Rutland with tons of wicked charm, as well as a beautiful head of hair. Twin Cities favorite Ann Michels plays Cayla Woodling, Ben's love interest--they have wonderful chemistry together, and they sing real pretty too.

The Ordway has created (and co-created) some fabulous productions in recent years (including The Sound of Music, The Pirates of Penzance, and Damn Yankees) and their excellent work continues to inspire and entertain.

Paint Your Wagon honors the beautiful songs of Lerner and Loewe while simultaneously telling a modern, thoughtful story of a moment in American history when people from a range of origins all came together. Representation matters, and it's so exciting to see it onstage at the Ordway.

(co-written by Jules and Carly)
Posted by Jules