Broadway Songbook: Kander & Ebb & All That Jazz at Ordway 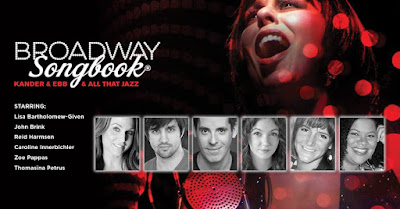 If you are looking for a delightful evening of song and dance, you better hurry and get tickets to the Broadway Songbook: Kander & Ebb & All That Jazz.

This is a musical revue of, you guessed it, Kander & Ebb songs. Now, who are Kander & Ebb? John Kander and Fred Ebb were the composer and lyricist (respectively) of many shows from the 1960s through 2015. They are mainly known for the shows Cabaret and Chicago -- though they also wrote the song "New York, New York." They were (Ebb died in 2004) the only writing team that worked together for as long as they did. Most of the other writing teams worked with other people: Rodgers and Hart became Rodgers and Hammerstein, and Rodgers even wrote a musical with Sondheim. Kander & Ebb were always Kander & Ebb - so much so that they both felt that they were one word "kanderandebb."

This revue, playing at the Ordway, is a charming and delightful evening of song and dance...even though the lyrics can be a bit dark. Put together by Jeffrey P. Scott and James A. Rocco, the show is hosted by Rocco. He tells a lot about the songwriting team, their history, the shows, and is a perfect host throughout. Rocco also joins the rest of the cast for a few numbers and has two solos including a very nice "New York, New York." This is one of the very small problems with the work of Kander & Ebb: the songs that everyone knows and loves are so connected to certain people. For example, the minute you read "New York, New York" you probably started hearing the voice of Frank Sinatra. When you read the word Cabaret, you may have heard Liza Minnelli, which is fitting because she has often stated that she would not be who she is without Kander & Ebb. 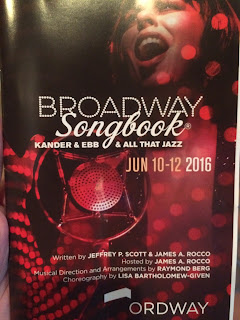 Rocco and Scott arranged the order of the songs so that there is a great flow from unknown songs to big hits. Both acts start with relatively unknown numbers and end with a smash. The cast of seven (which includes Rocco) handled every song perfectly. Lisa Bartholomew-Given (who also choreographed), John Brink, Reid Harmsen, Caroline Innerbichler, Zoe Pappas and Thomasina Petrus created a great ensemble cast - working hard to get the voices of Liza, Frank, Chita, and Gwen out of your heads, while offering new interpretations of some of my favorite songs.

Petrus and Pappas were fantastic in the numerous songs they did solo, or with others. Bartholomew-Given and Innerbichler were great in the Chicago medley that closes Act One - singing and dancing their hearts out. Bartholomew-Given and Harmsen did a fantastic duet of "Money (Makes The World Go Round)" toward the top of Act Two - dancing and singing so hard I was afraid of a wardrobe malfunction.

Act Two also gave us a mini-version of the show Curtains which is a great, yet little-known show. Maybe the Ordway is looking to do a production? Clearly Rocco loves the material. John Brink has a fantastic voice that really carried his two solos - "Sometimes A Day Goes By" and the final number "The Day After That." The Broadway Songbook series are usually held in the smaller space, making it more intimate and informal. This production is in the main theater and yet there is so much amazing talent on stage that the hall was filled with energy, yet also retained an intimate feel.

It plays tonight and tomorrow - and I think you should go check it out. Especially if you have never been to a Broadway Songbook show - this is a good one to start with! Now at the Ordway till June 12th - three shows left.
Posted by KRL