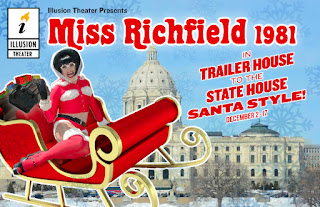 What can you say about Miss Richfield 1981 that hasn't already been said? She's a Minnesota institution, and her holiday show is one of the hottest tickets in the Twin Cities.

Her newest holiday offering, Miss Richfield 1981 in Trailer House to the State House, runs December 2 through 23 at the Illusion Theater.

According to my (legit bad) math, this is Miss Richfield 1981's seventeenth annual holiday show and let me tell you, the audience is devoted. As we waited for the show to begin (with our $9.00 drinks--what is this, Broadway?), the audience was lit up with cell phones as groups and friends and family and couples all got their selfies on. I don't know if I've ever seen so many pre-show selfies.

Michael Robins (Executive Producing Director at the Illusion, and director of this show) hopped on stage and welcomed the audience. He gave one instruction that was, frankly, a bit perplexing: Don't turn off your phones. WHAT. It's true, and as the show started and several people began to record the show, all of my theater instincts rebelled. I had to actively resist the urge to glare and sniff disapprovingly. But I managed to control myself. Also, the show was ON.

The show started with a hilarious video that talked about Miss Richfield 1981's failed attempts to run for President. It turns out, Miss Richfield 1981 is planning on running for president of Minnesota instead and is letting us behind closed doors on her upcoming campaign.

As always, the former beauty queen cracks wise about current events, cheerfully loading her act with casually biased remarks about all demographics. Somehow, she manages to say shockingly un-PC things without it ever feeling mean-spirited, managing to insult and entertain her victims at the same time. She also has a gift for tackling divisive issues in a hilarious way, poking fun at all sides of an argument but sneaking in her own opinions without insulting those who may disagree.

In the second half of the show, Miss Richfield's costumes change from the red, white, and blue of the politically-tinged first act to the red and white of Christmas, which is obviously a favorite. The traditional Christmas song sing-along is always a hit, with a few new twists that nod to events in the news. Above all, her show allows the whole audience to laugh with her, even if it's at themselves, creating a communal joy that is a lovely start to the holiday season.

The beauty of Miss Richfield 1981 for me is what an amazing show woman she is. From the first moment that she clomps (sorry, Miss R: struts) across the stage, the audience is in the palm of her hand. She makes it look so easy (much like Grant MacDermott in Sex Tips for Straight Women from a Gay Man) that it's easy to underestimate her amazing skill at working the audience.

And work the audience she does. From the very beginning, asking the audience where they're from (with a great running joke about Chanhassen) to the actual folks that she chats with in the audience about gay marriage, she finds the humor in every possible interaction. When reminding herself of an audience member's name ("Was it Mariah?" "MARA." "I don't need the tone.") or referring to two longtime married lesbians as Trisha and Dennis, her skill at working the crowd is amazing. And always affectionate, even when shutting down some loud schmucks in the back ("I really need to raise ticket prices.").