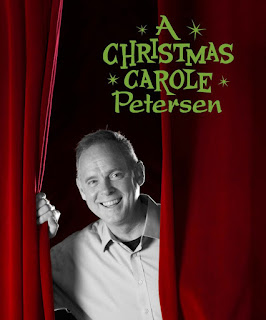 After an absence of eight years from Twin Cities stages, Theater Latte Da reprises a favorite from the theater's early days.

I admit a nostalgic fondness for the scrappy little startup theater's shows produced in the tiny, inaccessible, but charming, Loring Playhouse. We first caught A Christmas Carole Petersen there in the mid-2000s, and were so charmed by it that we returned with our own mom and dad.

This year, Latte Da brings us an early holiday present at the theater's new home, the Ritz Theater.

A Christmas Carole Petersen is back, and it's a joy to see Tod and all the Petersens back onstage. Tod Petersen takes us back to his childhood in Mankato, where he is part of a boisterous family led by the wonderfully warm and sweet Carole Petersen. Tod takes on the persona of his mother, reading from her annual Christmas letters and providing calm and thoughtful support to her husband and four children.

We learn about Tod's first brush with the theater (and his first crushing disappointment) and laugh at his re-creations of childhood memories, from his first audition to family celebrations. By way of illustration, Tod and the Carolettes sing a variety of holiday songs, from traditional carols, through the dreidel song, to new numbers written by Tod Petersen himself, director Peter Rothstein, and music director Denise Prosek.

Sara Ochs, Ryan Lee, and Dominique Wooten are all impressive performers in their own rights, and, as the Carolettes, they provide able support to the show, filling in as family members and revelers, playing a variety of instruments, and each taking a solo turn or two.

Though the Ritz is larger than the Loring, Michael Hoover's set for the show wisely keeps the performers close to the audience and feels quite cozy. As in previous years, music director Denise Prosek accompanies the production on piano from the stage, and is clearly a part of the show. An impressive number of additional instruments appear, from guitar and drums to ukelele and flute, played well by Prosek and the ensemble.

Tod Petersen, a well-known local performer, has a long history with Latte Da and an even longer history with director Peter Rothstein, who saw Tod playing his younger self and his mom at a party and thought there might be a show in it. The rest, as they say, is history.

The stories are funny and sad and heartwarming, and the music beautiful and cheery. The joy radiating from the stage is contagious; I can't recall being in an audience so ready to join in the fun! By the end of the show, you'll feel like you've spent a lovely time getting to know Carole Petersen and her very special and oh-so-relatable family.
Posted by Jules