Why I Love In the Heights (and you should too) 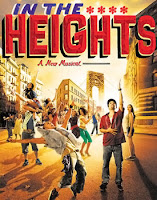 With the news Lin-Manuel Miranda's 2008 Tony-winning musical In the Heights is part of the 2017-2018 Ordway season, it just reminded me of how completely obsessed I was with this show when I first saw it on Broadway in July 2008.

The Ordway is presenting In the Heights in collaboration with Teatro del Pueblo from September 12-24, 2017. Don't miss it!

Okay, back to me. I mean, OBSESSED.  So obsessed that I avidly followed an In the Heights message board. So obsessed that we went back to New York in February 2009 just to see Lin-Manuel Miranda's last performance as Usnavi.

And so obsessed that I watched every single video about the show. Even back then, Lin-Manuel Miranda knew how to work social media. He posted fabulous, hilarious, insider videos and his genuine love for his work, the show and the theater came through in every one.

Here's a few must-watch videos to get you psyched for In the Heights at the Ordway:

Gorgeous backstage look at the recording session for the cast album. See and hear the cast sing the heck out of this fabulous show.

Dreams Come True ... In the Heights
For every musical theater nerd who sang the hell out of a cast recording in their bedroom, here's a holiday gift from the cast of In The Heights in December 2008.

I'm not crying, you're crying.

Legally Brown: The Next Search for the Next Piragua Guy (link goes to the whole series playlist)
Lin-Manuel Miranda's faux reality series about the search for the next piragua guy is freaking hilarious, and features so many fabulous (and self-mocking) Broadway cameos and references. Including the "ubiquitous Seth Rudetsky"!

To Life; Vanessa's Wedding Surprise
So, Lin-Manuel Miranda married his Vanessa in 2010, and put together this fabulous wedding surprise. So stinking cute.