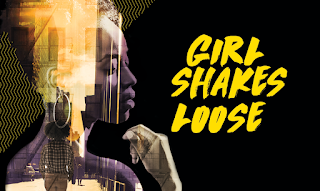 
This intimate new musical by Imani Uzuri (music & lyrics) and Zakiyyah Alexander (book & lyrics) includes the words of poet Sonia Sanchez, whose work is grounded in the Black Arts Movement of the 1960s. Directed by May Adrales, this is a rare show that has a creative team comprised of all women of color.

If that's not reason enough to celebrate this show, Penumbra Theatre and Artistic Director Sarah Bellamy have been directly involved with the bringing this musical to life. As Ms. Bellamy writes in her program note:


"That we are investing in the representation of ourselves, our lives, how we love, and who we love with such tenderness, excellence and ferocity is to be widely celebrated. GIRL Shakes Loose truly is #blackgirlmagic!"

The story of GIRL Shakes Loose isn't groundbreaking, except that it's being told about a young woman of color. The title character, simply called GIRL, is a young black woman at a crossroads in her life. She has worked hard for success, attending a good college, obtaining a graduate degree, and running her own start up in Oakland, California. When her company goes bust, she loses any sense of who she is, and has to learn whether her life is worthwhile without the career success she worked so hard to get. Meanwhile, her love affairs are in equal disarray. GIRL heads to New York, and then to Atlanta to attend a family funeral, all the while figuring out what home really means.

As played by Alexis Sims, GIRL is quite sympathetic, even when she's feeling very sorry for herself. It helps that her moping isn't indulged by her friends, or by her family when she goes back to Georgia. She has an engaging spark of energy, and her voice is, quite simply, exceptional.

Jamecia Bennett brings her considerable talents to bear as GIRL's aunt, who tries to reunite her niece with the mother she hasn't seen in years. Thomasina Petrus is, as always, terrific as the mother who feels abandoned by her child but can't bear to condemn her.

Bennett and Petrus also stand out as singers in the eight-member ensemble which musically accompanies GIRL's journey and play the people she meets along the way.

A few standouts: John Jamison is very funny as a friend whose couch she crashes on, and he has an amazing singing voice which I hope to hear again soon. Kory Pullam, wonderful in so many local productions of the last few years at Pillsbury House, the Guthrie, as well as a standout role in Choir Boy, is compelling as an old love, while Tatiana Williams shows tenderness as well as anger as a more recent lover. China Brickey, Lamar Jefferson, and Valencia Proctor also bring beautiful voices to the mix.

The music is contemporary, with detours into gospel, doo-wop, R & B and other styles, with the strong ensemble present for most of the music and Sanford Moore leading the band from backstage. John Acaerrgui's sound design puts the voices front and center without being over-amplified. I wasn't exactly whistling when I left the theater, but I could see the music taking hold over a few listenings.

In intention, the show felt a little RENT-like to me. Possibly due to the minimal set and revolving cast of characters, and possibly due to a plaid shirt that outstays its welcome on stage.

But I love that the show is trying something new, musically and narratively. Not only is it telling the story of a young woman of color finding herself, it's also telling a story in which a person doesn't have to find someone else to find herself. This is pretty unusual in musical theater, and I applaud it wholeheartedly.
Posted by Jules