Speed Dating through a Bunch of May Theater

Y'all, we've seen a LOT of plays lately. And we have fallen down on our mission to share these works with you, our loyal and devoted readership. In an attempt to win your hearts again, and to start the summer theater season with a clean slate, here is our speed dating recap of recent local theater. 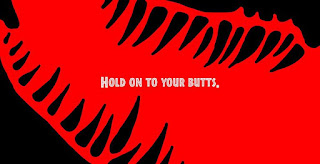 Five Fifths of Jurassic Park - Minnesota Fringe benefit at Ritz Theater
How have I NEVER been to any of these shows before? I am appalled at myself and my co-blogger Jules. Here's the scoop: They pick a script, divide it into five parts and give it to five local theater companies to put their own spin on it--one night only.

This year's companies were Shanan Custer with the Mysterious Old Radio Listening Society (listen to their podcast--it is MOST fun), Lounge-asaurus Rex (who I will now be following avidly, and not just for his impeccable taste in suitwear), Wayward Theatre Company (totally new to me--yay, new discoveries!), Blackout Improv (absolutely amazingly hilarious), and Erin Sheppard Presents (always fabulous and their costumes were ON point.) So fun and such a great teaser for the Fringe (August 3-13, 2017)!
Sweetland: The Musical - History Theatre
Based on the lovely movie of the same name, which was based on a short story by local author Will Weaver, and with music by Dina Maccabee, and lyrics by Laurie Flanigan Hegge, and directed by Perrin Post .. With such a lovely pedigree and as it is such a labor of love, we wanted to like it more. However, our friend Cherry and Spoon loves it deeply, so please check out what she had to say!

Red Velvet - Walking Shadow Theatre Company
A really interesting premise from a well-regarded theater company, and a new play by a female playwright of color, Lolita Chakrabarti. (Fun fact: In London and New York, her husband Adrian Lester played the leading role). How can you go wrong? Although this was a very watchable play, and featured some strong performances, we ultimately found the play lacking. Single White Fringe Geek does a great job of outlining where we felt the play fell short. And although we adore JuCoby Johnson, this role didn't feel like the right fit for him.

Next on the calendar was Medea at New Epic Theater, but that show was cancelled. As we've seen great work from them in the past, we hope they sort out their issues and return to making theater.

Lone Star Spirits - Jungle Theater
Which we saw on its LAST DAY. So not helpful to anyone, particularly since the show was GENIUS. Dang it! The play, by Josh Tobiessen, was brought to life by director Sarah Rasmussen with a terrific ensemble of Terry Hempleman, John Catron, Christian Bardin, Nate Cheeseman, and Thallis Santesteban. Set and costume designer Sarah Bahr created the perfect small-town atmosphere, and the show ran a tight 80 minutes. So glad they extended a week and we were able to see it.

Charles Francis Chan Jr.'s Exotic Oriental Murder Mystery - Mu Performing Arts
Lloyd Suh's script examines and critiques Asian American stereotypes using a play-within-the play to bring unspoken assumptions into the light. Randy Reyes directs this funny, thought-provoking, and challenging piece with a wonderful cast. And the show is in the Dowling Studio at the Guthrie, so tickets are just $9! Catch it before the show closes on May 28.

Broadway Songbook: Hollywood and Broadway - Ordway Center for the Performing Arts
Though the show started a bit slowly, with songs best known as standards rather than theater music, the talented cast brings zing to songs from shows from 42nd Street to Grease to Legally Blonde. The Songbook series has been a wonderful addition to the local theater scene, and we hope it continues after James Rocco leaves the Ordway later this year.

Refugia - The Moving Company
This new work, playing on the Guthrie's McGuire Proscenium stage, aims to explore "exile, borders and the displacement of people," but we found the piece problematic, seeming to focus on white characters and stories and to underuse its few actors of color. Our friend Laura from One Girl, Two Cities wrote a wonderfully thoughtful post on this show, which has sparked an amazing amount of discussion in the local theater community. 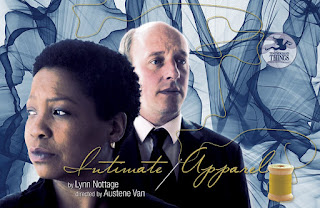 Intimate Apparel - Ten Thousand Things Theater
Playing at Open Book through June 4, this gem of a play by Lynn Nottage is sensitively staged by Austene Van in TTT's trademark stripped-down style. The excellent cast is led by a luminous Aimee K. Bryant as a seamstress at the turn of the century who yearns for love and seems to find it by corresponding with a man working on the construction of the Panama Canal. As always, the cast is superb, and though I had seen this play when the Guthrie did it in 2005, I had forgotten what a wonderful script it is.