I need to start off this Chicago theater trip recap with a massive shoutout to the League of Chicago Theatres.

We recently traveled to your fair city to see a few shows, but we had not made a lot of advance plans. After a cursory online search, we had a lot of options, but was having trouble deciding. We stopped by the Hot Tix location on 72 East Randolph and had a lovely chat with the Hot Tix 'theater geniuses.' They described the various available shows, provided incredibly helpful directions (including train stops) and helped figure out if we could make it from one show to another in ample time. The next day, we stopped by the Block Thirty Seven Shops on State Hot Tix booth to decide on our final show of the trip. The charming and hilarious theatre genius helped us pick out a show that was relatively unknown to us, but turned out to be an amazing experience.

Thank you for all the awesome theater help,

More about the League below, but now on to the shows!

Shakespeare in Love - Chicago Shakespeare Theater
Despite the fact that we didn't really love the movie that this play is based on, we absolutely love Chicago Shakes and will take any opportunity to see a play there. Love their beautiful house, the gorgeous location on the lake, and the fabulous lobby bar that looks like a miniature British pub. They also do beautiful theater--we adored previous shows like Heir Apparent, Sense & Sensibility: The Musical and even way, way back to Pacific Overtures.

Directed by Rachel Rockwell, with scenic design by Scott Davis and costumes by Susan E. Mickey, Shakespeare in Love was beautifully put together. Kate McGonigle was a delightful Viola, and led a strong ensemble cast. I wish Will Shakespeare was a stronger character--he didn't have much to add to the action despite being the lead character. The action picked up immeasurably when Luigi Sottile as Ned Alleyn leapt onto the stage. His energy and enthusiasm, as well as a charming personality and mad fight skills brought the entire show up to a new level. He will be one for these Minnesota Theaterlovers to watch. A few musical interludes showcased amazingly strong voices, and made me wish the entire play was a musical. Still, Chicago Shakes rocks and we are always happy to be there.

Bonus! Check out this completely adorable interview with Luigi Sottile and his dog Dash, who also stars in the show.

Marry Me A Little - Porchlight Music Theatre at Stage 773
Recommended by the folks at Hot Tix, we took the train out to Lakeview to Stage 773 to check out this charming (and short!) musical created by Craig Lucas and Norman Rene and comprised primarily of songs cut from Stephen Sondheim musicals. This two-person musical directed by Jess McLeod stars Bethany Thomas and Austin Cook (who also serves as the musical director) is about two urban singles living in the same apartment building and the full arc of their romance, with the song lyrics telling their story. The two terrific actors don't need dialogue to create their characters, and it's interesting to see how the context can change the meaning of these songs. Porchlight has a great graphic on their website showing where the songs in the show originated. 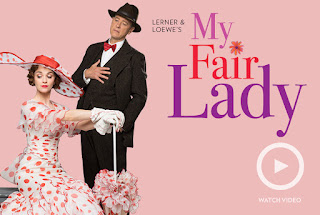 Next up was the whole reason for the trip: My Fair Lady at Lyric Opera of Chicago, which had us at Richard E. Grant playing Henry Higgins. Add in Bryce Pinkham and Lisa O'Hare, so fabulous in A Gentleman's Guide to Love and Murder on Broadway, and there was no way we were missing this. This sumptuous production premiered in Paris, which may explain the fashion-forward costumes. It's nice to see a colorful Ascot scene, and Eliza's dress (see pic above) is to die for. O'Hare is a forceful and gorgeously sung Eliza, and Grant makes a rather charming Higgins, managing to seem more absent-minded than purposefully mean. And it's rather thrilling to see the show with an enormous singing and dancing chorus. Lyric Opera is knocking these musicals out of the park lately. We adored their Carousel (with Steven Pasquale and Laura Osnes). Next year's big Lyric Opera musical? Jesus Christ Superstar.


Do you believe in theater miracles? We do. Good timing paid off when we stopped by the Private Bank Theatre and bought two second-row tickets to Hamilton for that afternoon at face value. We'd seen Hamilton back in September 2015 and couldn't even really absorb what we were seeing. To see it again, with an amazing cast that included Daniel Breaker as Aaron Burr, Karen Olivo as Angelica Schuyler and ton of (new to us) other fabulous performers. And to see it so close? Amazing.

FYI: The show holds UP y'all. A couple of outstanding cast members that join Luigi Sottile and Bethany Thomas on our must-see list: Samantha Marie Ware as a fun-to-watch Peggy/Maria, Jin Ha as a hilarious King George, Colby Lewis as Lafayette/Jefferson (Daveed Diggs is pretty tough to compete with but Lewis made the role his own), Wallace Smith as a magnetic Hercules Mulligan/James Madison, and Jose Ramos as a heartbreaking Philip Hamilton. Really, the whole cast was fantastic. You should see it. But don't buy resale tickets. All that does is benefit evil ticketing companies and promote scalping. Boo hiss.

To finish off the trip, the Hot Tix theater geniuses recommended Beyond Caring at Lookingglass Theatre. When we asked why we should see the show over another choice, we learned that it originated at the National Theatre in London and was having its US premiere, plus it was the last night, and we were sold. Set in the break room of a manufacturing plant amongst the temp, minimum wage workers and their supervisor, this immersive performance featured amazing performances and a fascinating, thought provoking script. Written and directed by Alexander Zeldin, this was the perfect, meaty, marvelously acted play to finish off our trip.

Love you, Chicago. We'll be back soon!


Looking for a show to see in Chicago? Check out ChicagoPlays, the League's comprehensive theater listings.

How about a deal on tickets? Try Hot Tix, both available online and in person at the following locations (highly recommended!):