Waitress at the Orpheum 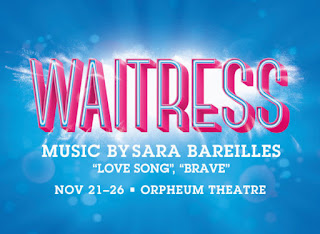 The touring production of Waitress is now playing at the Orpheum Theatre in Minneapolis through November 26.

Based on the 2007 movie of the same name, Waitress features music and lyrics by Sara Bareilles.

Two good things: The audience was exceedingly well-behaved and attentive--which is weirdly rare for Hennepin Theatre Trust press nights--and responded incredibly effusively and positively to the show. I'm sure many positive reviews will be flooding the internets. It is a crowd pleaser, to be sure.

I went into Waitress with only a bit of knowledge about the show. I'd heard of the movie, and the tragic, horrifying murder of the film's writer/director Adrienne Shelly. The Broadway production opened in spring 2016 and is still running--it's up to 657 performances, which is no small feat. It received a few Tony nominations, including a nomination for Jessie Mueller in the lead role. This is all to say that lots of people liked this show.

That said, I'm not one of them. I have some serious issues with this show, which I will enumerate in full, exhausting detail. So get comfortable. (Or if you want to read a review by someone much less cranky, I recommend my dear friend Cherry and Spoon.)

Waitress centers on Jenna, a pie maker and waitress for a small-town diner, who is unhappily married to Earl and discovers that she is pregnant. She confides in her best friends and fellow waitresses, sassy Becky and shy, neurotic Dawn. She starts seeing a new gynecologist, Dr. Pomatter, and begins an affair with him. Meanwhile, Becky has an affair with Cal, the cook at the diner, and Dawn starts to online date and meets Ogie, who stalks her at the diner until she falls in love with him.

First, let's talk about the plot. Descriptions for this show alternately describe Jenna's marriage as 'loveless' and 'abusive.' The script itself is pretty coy about how abusive this relationship is, with intimations of offstage violence. However, parallels are drawn between Jenna and Earl's relationship and her mother and abusive father, and Jenna's behavior indicates abuse is taking place. She plans to leave him until she finds out she is pregnant, then hides money in order to enter a bake-off which has prize money she could use to leave him. Earl finds the money, which she says is to buy a crib, and the two are still together up until Jenna is delivering the baby. She has the baby and finds the strength to tell him off in a dramatic fashion from her hospital bed. He leaves, presumably never to be seen again. At this, the audience cheered supportively.

But here's the deal. That's not how this works. That's not how any of this works. Sure, she tells him to stay away from her and the baby. But she is married to him. She lives with him. She has a job that she can barely support herself on, much less a baby. Plus, now she has hospital bills. Also, lest we forget, he is her baby's father, which means he has legal rights to custody. If he is a manipulative, abusive man--as has been depicted--he will not hesitate to use his rights to that child to punish her.

I don't need to tell you the statistics about domestic violence (like 72% of all murder-suicides involve an intimate partner and 94% of the victims of these crimes are female, for example), but suffice is to say that to depict leaving an abusive relationship this easily is incredibly thoughtless and appalling. Frankly, it's infuriating.

The National Center for Domestic Violence has a fantastic chart called the Power & Control Wheel that helps describe accurately what is occurring in an abusive relationship. (BTW, according to this, Earl is abusive AF.)

Ramsey County has a great collection of domestic abuse resources for anyone concerned about their or someone else's safety.

Let's move on! So Jenna and Dr. Pomatter start an affair, despite the fact that they are both married. Although we know of Jenna's situation and are sympathetic to her issues, there's no indication that Dr. Pomatter's marriage is anything less than happy, so what is his motivation for the affair?

This is where the lack of characterization in the script really shows. I challenge anyone to tell me about Jenna with words that don't involve pie. I think the show thinks of her as the calm pie-making center of the show, but there is so little there there. She came from an abusive home, but loved her mother who taught her to bake. She is supportive of her friends and makes pies with cute names. That's about all we know about her. I can't help but wonder if a lot of the show's success is due to the uniquely charismatic performance of Jessie Mueller, who originated the role on Broadway.

And the other characters? Pretty much summed up in one word. Becky? Sassy. Dawn? Neurotic. Cal the cook)? Grumpy. Earl? Angry. Dr. Pomatter? Slightly awkward.

Jenna and Dr. Pomatter appear to be together in this show because he is the first named male character she meets after becoming pregnant. How can we be invested in this relationship if we're given no reason for them to be together, and why he is jeopardizing his marriage and she her safety? It almost seems to be an excuse to show them engaging in pie-related, surprisingly vulgar sex (on a gynecological examining table--ew), which is played for laughs. At the end, when he tries to kiss her after she meets his wife, she breaks it off with him with very little emotion on either part.

There are really serious implications to having extramarital affairs, and this show does not seem to take any of them seriously. Not only are they having an affair, but he is her doctor, and they appear to be having most of their assignations in his examining office. In case we all forgot, there are some pretty strong ethical issues with this relationship. Just ask the AMA.

Here is where I can hear the chorus of "But it's a musical! It's light and funny! It has pie! Why are you taking it so seriously?" I am taking it so seriously because the issues that the musical raises are serious. Musicals can absolutely raise and address substantial issues responsibly and entertainingly (see Next to Normal, Fun Home, In the Heights, Assassins.)

Back to the show. Not only does Jenna have an affair with her married doctor, fellow waitress Becky has an affair with diner cook Cal. She is married, but her husband is an invalid, and Cal is married, but the waitresses think his wife is probably gay so it's all fine. Also, there's an element of mockery at the spectacle of two people of size getting it on in the kitchen, which was worrying.

Had enough of adultery? Me too. Let's move on to stalking! Neurotic waitress Dawn decides to get out into the dating world and goes on a date with Ogie. He shows up at the diner and she is upset to see him, as she told him she never wanted to see him again. He sings a song entitled "Never Ever Getting Rid of Me", which includes the following lyrics:


"Oh, I'm gonna do this right
Show you I'm not moving
Wherever you go, I won't be far to follow
Oh, I'm gonna love you so
You'll learn what I already know
I love you means you're never, ever, ever getting rid of me"

Eventually, he "wins her over" and she agrees to go out with him, they discover they have lots in common and end up getting married. The messages here are that 1) stalking works and 2) Dawn doesn't know what she wants or needs, both of which are pretty appalling notions. And that's before getting into the idea that "no" might mean "yes."

However, Ogie is played completely for laughs and had the audience in his pocket. The performance by Jeremy Morse was absolutely hilarious and off-the-wall, which made it challenging to step back and see his actions objectively.

Let's talk about the baby. Throughout the entire show, Jenna is conflicted about her pregnancy and the baby. Her only plan is to save money to enter a bake-off, win the bake-off and then have money to leave her husband. That falls through, which leaves her completely without a plan. At the hospital, after telling off her husband and breaking things off with the doctor, she sings a song called "Everything Changes" which indicates that, apparently, the baby is going to solve all of her problems.

How does the show end? With a grumpy customer at the diner (who only Jenna is kind to) leaving her money to start her own diner, where she works happily with her friends and daughter Lulu. Pretty lucky, that. She really didn't have to do anything except make pies and be in the right place at the right time. That's not something that I admire in a character. I want someone who has some agency and some pluck, if I'm going to spend several hours with them.

Laying the script and content aside, I found the songs to be simplistic, repetitive, and unmemorable. Reviewing the songs with the help of Genius only underlined this for me. Speaking of incessantly memorable, there is a strange refrain of "butter...sugar...flour" sung from offstage during the show, which was annoying and reminded me of this commercial:


The direction was surprisingly static with the songs sung presentationally, in the old-style opera fashion of "park and bark" or "plant and rant," which even opera doesn't even do any more. Most of the movement took place by moving scenery around, which is disappointing. A diner should offer many opportunities for interesting movement, and I wish Waitress had used a fraction of the energy and stage movement of Mixed Blood's fantastic production How to Use a Knife.

In spite of the issues with the show, there were some bright spots. Lenne Klingaman played Dawn beautifully, creating a hilarious, vivid character in spite of the script, and as mentioned, Jeremy Morse was entertaining as Ogie, and neatly distracted the audience from his character's obvious flaws.

And as I said, the audience certainly enjoyed it.
Posted by Carly