Catching Up - Some Shows We Saw in October 2017

Here's a bunch of shows we saw lately:

How to Use a Knife at Mixed Blood Theater

We saw this on the very last night, which is always so sad because the show was amazing. Written by Will Snider and directed by Jesca Prudencio, this fast-moving, complex drama (with a fair dash of humor) set in a restaurant kitchen was utterly fantastic. From the enormously detailed (and working!) set to the rich, vivid performances to the unbelievable movement on stage, this show was a delight. The entire cast was wonderful, with particularly outstanding performances by Zach Myers as volatile head chef George, Raul Ramos as agreeable (to a point) sous-chef Charles, to Ansa Akyea as 'Steve' the dishwasher behind whose calm appearance lies incredible secrets. Big shout outs also to Jake Caceres, whose energy adds so much to the mix. Loved it!

The Minotaur by Theatre Pro Rata at the Crane Theater

Written by Anna Ziegler and directed by Amber Bjork, this retelling of the classic myth is about Ariadne, her brother, the Minotaur, and Theseus, who has come to slay the Minotaur. It's an incredibly compelling production, with a bare bones stage, a small, excellent cast and perfect costuming by Mandi Johnson. It's one of those shows where maybe you don't understand everything that's happening, but you are on board completely with the ride. The retelling is fascinating with a mix of modern and classical language, and the performances are terrific, particularly those by the three main actors: Stanzi D. Schalter (Ariadne), who is like a Disney princess come to life--only more interesting, Derek Meyer (Theseus), whose vain handsomeness and comic timing is perfect for the adventuring Theseus, and Kip Dooley (The Minotaur), whose deep complexity is mesmerizing to watch. (Also, online program! Sweet!) 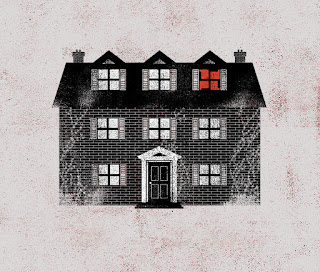 The Watch on the Rhine at Guthrie Theater

A bunch of our Twin Cities Theater Blogger friends really enjoyed this show and saw copious parallels to the events of today, but it left us cold. I am so tired of the arch, mid-Atlantic accent (think Katherine Hepburn) and, frankly, the problems of rich, white people. Yes, it's about a spy fighting fascism and Sarah Agnew is wonderful, but the rest? Sneh. (Love the gorgeous show art, though.)
Posted by Carly