Your Guide to Hamilton: Part Three - A Personal Note

A personal story (or six) about Hamilton. Wherein we talk about having seen it YEARS ago on Broadway with the original cast. I mean, we can't NOT mention that, right?

Years before Hamilton premiered anywhere, we were huge fans of Lin-Manuel Miranda and his first Broadway show: In the Heights, which we saw in July 2008. Such big fans that we traveled to New York in February 2009 to see Miranda's last performance as Usnavi. Sigh! And OMG, so many theater bigwigs in the audience.

We also saw Bring It On (which Miranda wrote some of the music for) in 2012, which was cute and energetic and had an audience filled with amazingly excited youth, but did not have nearly enough Lin-Manuel Miranda-ness.

So when word started hitting the street about Hamilton: An American Musical, we got ready.

Hamilton premiered off-Broadway at the Public Theater in New York in late January 2015 and almost immediately sold out. We had seen Fun Home at the Public in the intimate Newman Theater (299 seats) before Broadway and would have loved to catch Hamilton there as well. Alas, despite becoming members of the Public and obsessively checking the website, we were unsuccessful. 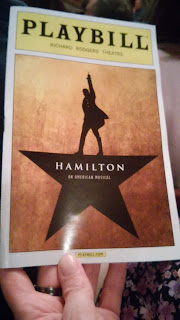 Hamilton began its Broadway run on July 13 and three days later, we bought tickets for September 2015. $89.00, y'all! Rear mezzanine, but STILL! We planned our trip completely around these tickets and it was well worth it.

Hamilton had its official Broadway opening on August 6, 2015 at the Richard Rodgers Theatre on 46th Street, the same theater that housed In The Heights--where Lin used to skateboard back and forth on the balcony over the marquee. And the show is still there, and selling like crazy.


Here are my scattered notes on Hamilton from my theater journal:


We were up in the 2nd mezz but happy to be there. Especially as tickets were pretty much unavailable until about May (2016). Crazily, there were actually a few empty seats next to us. We stopped at the merch booth, where I bought a cute red Hamilton tee. We pre-ordered intermission drinks (with Hamilton cups!).

So, the show! We loved Lin-Manuel Miranda and wanted to see this since it was at the Public. It's a rap (hip-hop) musical about the life of Alexander Hamilton based on the book by Ron Chernow with a completely multi-racial cast. Miranda as Hamilton, and the utterly fantastic Leslie Odom, Jr. as Aaron Burr (the narrator). I loved seeing so much of Odom, he's marvelous. Christopher Jackson as George Washington. Daveed Diggs as Lafayette/Thomas Jefferson. And Renee Elise Goldsberry as one of the Schuyler sisters.

Gorgeous performances, fabulous lyrics and music, amazing staging, too many references to catch right away. Beautifully done, energetic, moving--almost too much to take in on one showing. So danged good. Can't wait to hear it again. I don't really know what else to say! We tried to see it again but the lottery was crazy. So Julie bought a tee shirt too and we headed back to our apt. Oh, and Jonathan Groff as King George! So funny! And the show was very romantic as well. Sight! So glad we saw it. Oh, and I saw Andrew Rannells right inside the stage door when we walked by.

Random remembrances from our Hamilton trip:
Oh, you thought I was done talking about how I saw Hamilton? NO SUCH LUCK.

We also saw it in Chicago in May 2017 by scampering to the box office after the unsold digital lottery tickets were released. (Pro tip.) We were in the second row and it was utterly fantastic. Daniel Breaker as Burr, Karen Olivo as Angelica, fantastic

A few more random thoughts: The first time we saw Hamilton was before the cast recording was released and before it won all those Tony awards. It was hard to even absorb how amazing the show was. Like looking directly at the sun.

Also, back in 2015, they had about two tee shirts (not even women's cut) tee shirts on a stand by the bar. I think we had to ask a bartender if we could buy them. And now? It's merch central. There's even a standalone Hamilton store down the block from the Richard Rodgers Theatre.

Our other Hamilton Posts for your enjoyment:
Part One: What You Need to Know
Part Two: So Now You're Obsessed

From two theater lovers to other lovers of theater, we hope you love the show as much as we did and do, and make your own Hamilton memories. Cause you're young, scrappy and hungry. Happy Hamiltoning!
Posted by Carly