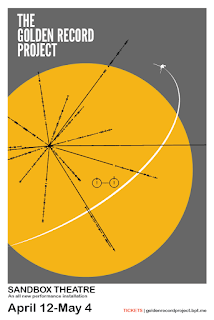 We've never seen anything like The Golden Record Project at Sandbox Theatre (through May 4). An art installation and a performance piece set simultaneously in the past and the future, this truly immersive show is, frankly, mind-blowing.

Pro Tip: When you go (NOT IF), go early so you can explore the installation fully before the performance begins. And book your tickets now. Audience space is limited and tickets are going fast!

Here's the backstory: When NASA sent the Voyager spacecraft outside our solar system in 1977, a team led by Carl Sagan and Ann Druyan prepared a recording to accompany the probe. The idea was to provide an introduction to the people of Earth to any intelligent beings that may find the craft.


For the Golden Record, the team "assembled 115 images and a variety of natural sounds, such as those made by surf, wind and thunder, birds, whales, and other animals. To this they added musical selections from different cultures and eras, and spoken greetings from Earth-people in fifty-five languages, and printed messages from President Carter and U.N. Secretary General Waldheim." (https://voyager.jpl.nasa.gov/golden-record/whats-on-the-record/)

These sounds and images were recorded on golden vinyl records and encased in round metal containers. The containers were etched with instructions in binary code for using the enclosed stylus to play the record.


"The spacecraft will be encountered and the record played only if there are advanced spacefaring civilizations in interstellar space." - Carl Sagan (https://voyager.jpl.nasa.gov/golden-record/whats-on-the-record/)

What do we send out beyond the galaxy to represent us?  That's what Sandbox Theatre, in conjunction with the Standish-Ericsson Golden Record Preservation Society of the Twin Cities and Greater Metro Area (S.E.G.R.P.S.T.C.G.M.A.) have sought to explore with The Golden Record Project.


The Sandbox storefront space has been transformed into a gallery. The audience members, limited to 12 per performance, are welcomed to the exhibit, given a numbered lanyard, and invited to explore. Rooms and alcoves are filled with art, audio installations, slide shows, videotaped recordings and even a living room space that beautifully depicts 1977 (down to the phone and board games). Some of the objects will remain a mystery until the performance begins.

A representative from S.E.G.R.P.S.T.C.G.M.A.(Elizabeth Horab), note cards and professional smile in place, welcomes the audience to the exhibit, provides explanatory background, and introduces us to the world of the Golden Record Project. While surrounded by intriguing visual elements and fantastic, otherworldly (sorry!) music by Theo Langason and Morgan Schoonover, we meet performers Ajuawak Kapashesit and McKenna Kelly-Eiding and explore their relationship with the Golden Record and each other.

The Director's Note from Kristina Fjellman explains the impetus for this project:


"When I found out about the Golden Records, the whole notion of this historical gesture into outer space seemed so fascinating and rich with ideas about music, culture, humanity, etc. that I knew it was something worth exploring. I've been fortunate to have [worked] with this amazing cohort of visual, sound, and video artists, performers and project supporters who have made this exploration a reality."

The design of this show is absolutely stunning, from the costumes to the props to the utter transformation of Sandbox's theater space. Director Peter Heeringa keeps the performance to a tight and absorbing 60-70 minutes, and the performances are all quite compelling. Ajuawak Kapashesit, in particular, provided a mesmerizing performance and will be on our one-to-watch lists from now on.

We could go on, but you really should go check it out. We HIGHLY recommend this creative and innovative work. Get thee to the Sandbox to explore some amazing, thought-provoking art.

Accessibility Notes: We very much appreciate Sandbox's accessibility efforts, as outlined in these notes from their website:

Sandbox would like to make this production as accessible as possible, to the widest audience as possible. If you have a special request regarding the notes below, please reach out to us by calling 612-584-1815, or emailing goldenrecordshow@gmail.com and we will try our best to accommodate it.

When: April 12 - May 4, 2019
At: Sandbox Theatre
Running Time: Approx 60-70 minutes, no intermish
Tickets are even accessible, priced at a sliding scale starting at $10.
Posted by Jules