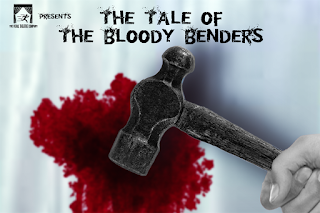 Taking it easy on day two, we spent our time at Strike Theater in beautiful Northeast with gorgeously ample street parking. We were a little sad that their weird Laffy Taffy and Skittles-rich concession stand wasn't open, but we got over it.

The Tale of The Bloody Benders By The Feral Theatre Company (Strike Theater)
A notorious family of serial killers in 1870s Kansas, the Benders makes a fascinating subject for a true crime-inspired Fringe show. Braden Joseph, playwright and director, begins the show with a campfire storytelling session that leads into an interesting depiction of the Bender family and their unique murdering style. Although short, this is a show with a lot of promise.

Plus, since it was short, we had some time to walk over to Indeed Brewing for a quick drink. (Tattersall Distilling is right in the building, but it's prohibitively crowded and loud for a good post-theater discussion fest.)

#FirstDate By Scammers, Thieves, and The Like (Strike Theater)
We headed back to Strike, suitably fortified and ready for some online dating-based comedy. #FirstDate is a long-form improv show, directed by Molly Ritchie, who created the hilarious improv show Family Dinner, which can be seen at Huge Theater, as well as a number of other improv shows. Advertised special guests include Breanna Cecile, John Gebretatose, and, at our performance: Allison Lonigro. A game cast of improvisers (Nicole Fende, Jackson Melius, Ed Timek and Allison Lonigro) tries to persuade online dater (Patience Nallick) to swipe right on them. An incomplete bio in the program made us wonder about Nallick's background in improv comedy. Or perhaps the intention was for her to play it straight as to set off the improvisation, but it actually tended to take the energy out of the comedy, despite the daters best attempts to engage. That said, Allison Lonigro's farmer girl dater was an absolute treat and a delight to watch.
Posted by Carly