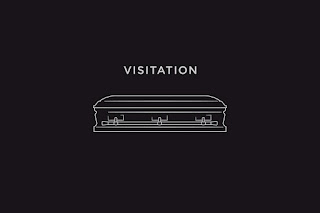 Wrapping up the 2019 Minnesota Fringe Festival with two amazing shows.

Mad props to this show for tackling subjects that people don't often want to discuss: death and grief. A beautifully written collection of stories and scenes, performed by Clarence Wethern, Sophie Javna, Karen Bair, Ben Tallen, Victoria Pyan, and Charles Numrich covered a variety of alternately funny and heart-rending stories about death and grief, accompanied by video projection. The writers include Heather Meyer, Laura Buchholz, Gemma Irish, Rachel Teagle, Sam L. Landman, and Tyler Mills. I hope this show has a longer life than just the Fringe--I'd love to revisit some of these moving stories again.

We had hopes of staying for the one of the hottest shows in the 2019 Minnesota Fringe Festival: Winding Sheet Outfit's You Are Cordially Invited to the Life and Death of Edward Lear. Alas, the show was very sold out.

I have to shout out the volunteer/staff member with the cute short haircut who did such a fantastic job of letting people know that was absolutely, definitely sold out. She stood on the steps outside the Crane and as people approached the theater, called out to them, asking if they had reservations. If they didn't, she politely let them know that the show was full and indicated that they definitely had time to make it over to Strike Theater. Just outstanding customer service. 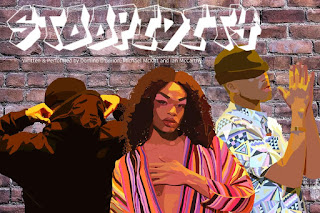 Stoopidity - By Ian McCarthy, Michael McKitt, Domino D'Lorion (Rarig Center Xperimental)
This was the last show we saw at the Fringe, and what a way to go out. The show is described as "3 blackboys sit on the front stoop of their apartment building, trying to navigate & understand what it means to love deeply. To question tradition. To be queer. To be unapologetically black in the world today." This show was a gorgeous verbal cavalcade of honesty, humor, love and strength. The talent of these (young!) men is staggering. We can't wait to see what they do next.

And that's it! It's all over for another year! Sigh.
Posted by Carly