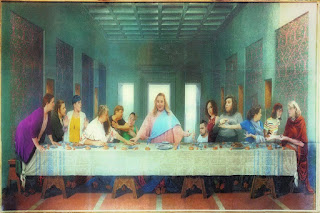 The Minnesota Fringe rolls on and the shows continue!

Escape This - TheatreX (Ritz Theater Mainstage)
Playwright Rob Matsushita puts a modern spin on the traditional locked room mystery by setting it in an escape room. Two couples (Hannah Bakke, Kyle Doherty and Christy C. Johnson, Ryan Vanasse) are introduced to their escape room experience by staff member Braylee (Ankita Ashrit).In case you haven't been, an escape room is an interactive experience where the players have to solve puzzles and find clues in order to unlock the room. But, as in the traditional locked room mystery, not everything is as it seems and secrets are revealed! It's an interesting twist on a traditional mystery, but could use a little more development. The back page of the program reads: "We promise that most escape rooms are actually pretty cool. Check these ones out," and provides a list of local escape rooms.

Size - Somerville Productions (Theatre in the Round)
Having heard nothing but love for Colleen Somerville's Not Fair, My Lady, we could not miss her show this year in the Fringe. As the show's description reads: "Nothing tastes as good as rejecting bullshit societal standards feels." This is a lovely, inclusive and personal show with semi-staged stories about body shape, weight, diets, and eating disorders performed by fantastic cast. Standouts include Lauren Anderson (of course) sharing a story of being heckled onstage and Linda Sue Anderson, barely containing her outrage--but hilariously--about a gym class from her youth. Skits include a date between two people who've brought along their worst food-shaming critic selves. Funny and truthful, we're complete converts to the cult of Colleen Somerville. 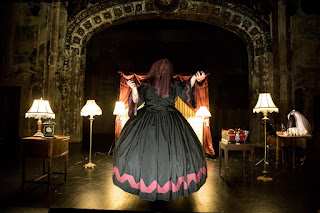 A Confederate Widow in Hell - Breaker Fixer (Southern Theater)
We saw this show at last year's Twin Cities Horror Festival but were persuaded to see it again by the charmingly persuasive actor and co-creator Joseph Fletcher, who promised that at least two-thirds of the show was new. In this atmospheric, funny, and inventive dramedy, a widow from the "War of Northern Aggression" (the brilliant Willi Carlisle) regales the audience with her memories about her life and the South, as well as some pretty fascinating reflections on the legacy of the South on present-day America. Fletcher also stars as her headless accompanist (you have to see it! It so works!).

Swan Song - Third Floor Flat Productions (Southern Theater)
Hey! It's another twist on the traditional locked room mystery. In this show, five actors and one stage manager meet at an isolated country house for a play rehearsal. But it turns out that someone has a nefarious plan and the cast is speedily dispatched. An engaging premise with some solid performances made this a lovely show to end a late night of Fringing.
Posted by Carly